We Got Power!: David Markey and Jordan Schwartz's book of photographs from 1980s Southern California hardcore.

- September 26, 2012
I received this press release from AGGRONAUTIX this morning.  A new book of photographs from the collections of David Markey and Jordan Schwartz called, We Got Power!: Hardcore Punk Scenes From 1980s Southern California, is available for pre-order. 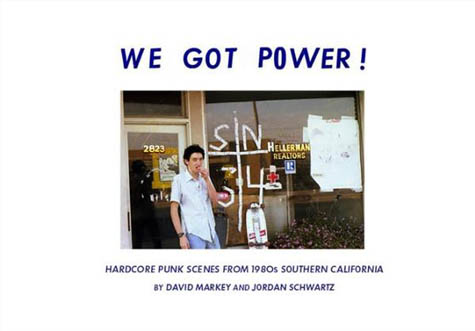 Here is the press release from AGGRONAUTIX.

WE GOT POWER!
Hardcore Punk Scenes From 1980s Southern California,
by David Markey and Jordan Schwartz 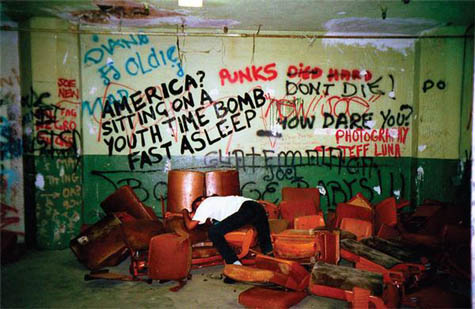 As teenagers in 1981, David Markey and his best friend Jordan Schwartz founded We Got Power, a fanzine dedicated to the first-generation hardcore punk music community in their native Los Angeles. Their text and cameras captured the early punk spirit of Black Flag, the Minutemen, Social Distortion, Red Cross/Redd Kross, Suicidal Tendencies, the Descendents, White Flag, The Last, The Gun Club, Saccharine Trust, Sin 34, Nip Drivers, Circle One, M.D.C., Big Boys, Youth Brigade, D.R.I., the Butthole Surfers, Firehose, and many others at the height of their precocious punk powers.

In the process, the duo's amazing photographs also captured the dilapidated suburbs, abandoned storefronts, and dereliction of the early Reagan era-a rubble-strewn social apocalypse that demanded a youth uprising! Never before seen except in crude fanzine form, these detailed and richly narrative photos are now collected to present an intimate portrayal of a uniquely fertile creative moment.

"A yearbook for SoCal dropouts who changed the world."-Inked

"The essays are sometimes anecdotal, sometimes reflective, but never maudlin. And photographs-nearly 400 of them, hard-boiled and loving simultaneously-capture the decrepit L.A. landscape and its wasted youth"-LA Record

"A nostalgic trip through the past for those who lived it, but an anthropological case study of a lesser-known subculture, and quite simply, a work of art"-The Los Angeles Beat

"The Black Flag bus rolled out to the San Fernando Valley to hear Minor Threat play. Jordan Schwartz was there, looking like a reporter straight out of some '30s movie, wearing a trench coat and a fedora with press pass in the hatband, holding a camera with an old-style flash reflector. It was a pivotal conceptual moment..."-Chuck Dukowski

ABOUT THE AUTHORS:
David Markey was born December 3, 1963, in Burbank, CA. He made his first film at the age of 11 and published a neighborhood newspaper at 12. In 1980, he became involved in the local underground music scene. He helped form Sin 34 in 1981, and captured the punk scene in the Super 8 film The Slog Movie. Markey was a part of We Got Power magazine from 1981 to 1983, then kept the name alive through his We Got Power Films. He cowrote and directed Desperate Teenage Lovedolls in 1984. He photographed, edited, cowrote, and directed Lovedolls Superstar in 1986. Also that year, his band Painted Willie toured with Black Flag for six months, a period depicted in his film Reality 86'd. Markey has directed music videos for Meat Puppets, fIREHOSE, Shonen Knife, Mudhoney, and Pat Smear, and collaborated with visual artists Cameron Jamie, Raymond Pettibon, and Kim Gordon.

Jordan Schwartz met David Markey while skateboarding in a flooded Santa Monica parking garage in 1979. As they discovered the growing Los Angeles hardcore punk rock scene, Jordan teamed up with David, his sister, Jennifer, and Alan Gilbert to found We Got Power magazine. Jordan contributed in many roles, including that of staff photographer. Jordan had producing and acting roles in Desperate Teenage Lovedolls and the sequel, Lovedolls Superstar, notably appearing as the rock star Brews Springstein. Jordan facilitated the release of three Black Flag skateboards featuring original artwork by Raymond Pettibon. In 1984, Jordan began working and living at SST Records' Global Network Agency booking gigs and tours for various high-profile bands on and off of the label during the pioneering years of the U.S. independent scene.

Word got out in the early 90s that the basement of the original Masque club was totally intact and untouched after all these years. So Dez Cadena and David Markey broke in and took a bunch of photos. "We felt like we were raiding King Tut's tomb-it was like an archaeological dig into LA punk history."