- October 26, 2012
Another installment of the Less Artists More Condos series being released as a tribute to Famous Class label partner, Ariel Panero.  This release pairs Deerhoof with Half Waif and is the fourth of the year's projected six releases.

The limited white vinyl release is already sold out, but standard black is still available for $5 at Famous Class.

All info, links and tracks are courtesy of Terrorbird Media.

New Deerhoof 7" out now with Half Waif, watch the documentary of the recording with legendary producer Chris Shaw

"Sexy, but Sparkly" marks the first time the long-running experimental band has worked with an outside producer, all digital proceeds of LAMC No. 4 go to support Ariel Panero VH1 Save The Music Fund. Available now though Famous Class. 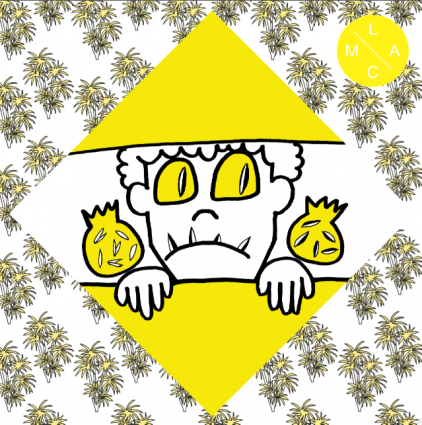 WATCH: Deerhoof on Masters From Their Day with Chris Shaw

In loving memory of their dear friend and label partner, the late Ariel Panero, the Brooklyn-based label Famous Class started the Less Artist More Condo series of 7"s. The series gets its name from the epic Less Artists More Condos concerts that Ariel threw, showcasing amazing bands in some strange and unique venues. Ariel’s driving force was a desire to get the bands he believed in the recognition he felt they deserved. This series simply tries to honor that idea. For each LAMC split 7” Famous Class asked one of their favorite bands to provide them with an unreleased track for the A-side. They were then asked to pick their favorite emerging artist to provide a track for the B-side. So far we've seen releases from A Place To Bury Strangers, Ceremony, Future Islands, Ed Schrader's Music Beat, Thee Oh Sees, The Mallard, and now today Famous Class welcomes another addition to their series. Like how Ariel’s LAMC shows introduced New Yorkers to bands they might not have otherwise discovered – Famous Class hope that this series will do the same.

Famous Class is thrilled to release LAMC No. 4 from Deerhoof who have invited Half Waif onboard for the split. The 7" will be out October 23rd, and just like all the previous releases in the series, the digital proceeds 100% go to charity. .

For the October installment in the series, Deerhoof's contribution “Sexy, But Sparkly” was recorded for an upcoming episode of “Masters From Their Day”, an on-going series of short documentaries. Deerhoof had produced all their own records until being paired with producer Chris Shaw (Weezer, Public Enemy, Bob Dylan) for this episode, making for a very collaborative experience. A short documentary on mastersfromtheirday.com will accompany the release of LAMC No.4 Each episode chronicles the efforts of a band and a record producer as they attempt to record a song in one day. The series gives a first-hand account of the creative processes behind the records being made by today's luminaries.

For the excellent b-side they invited to intriguing Half Waif to an arresting piece of baroque art pop that is as mysterious as it is difficult to place.

The 7" is available for pre-order right now with limited quantities of on white vinyl (100). Sure to go fast if not gone already.

The digital versions of LAMC No. 1 and 2 are currently available for purchase on the FAMOUS CLASS bandcamp page with 100% of the proceeds going to the Ariel Panero Memorial Fund at VH1 Save the Music.

DEERHOOF
Satomi Matsuzaki plays bass and sings, Greg Saunier plays drums, John Dieterich and Ed Rodriguez play guitars. But what is Deerhoof really? Hell if we know. Pitchfork went so far as to label Deerhoof as "the best band in the world." The New York Times described them as "one of the most original rock bands to have come along in the last decade." From their humble beginnings as an obscure San Francisco noise act, they've become one of indie music's most influential bands with their ecstatic and unruly take on pop. Deerhoof has released 11 self-produced albums and continues to tour the world frequently. The members of Deerhoof are Satomi Matsuzaki, John Dieterich, Ed Rodriguez and Greg Saunier.

HALF WAIF
Half Waif is half a person and half an idea—as yet in its formational phases, it arose from the ashes of past projects and has demanded definition over the past six months. It is an auditory grappling with life beyond college, beyond walls, beyond home-base. It is placeless and yet the product of many places, among them: the wilds of northern Massachusetts; Ohio’s stark fields; Brooklyn on a warm, lonesome night; and Plunkett's ancestral homelands of Ireland and India. A solo venture for now, Half Waif writes music influenced by equal parts classical theory and contemporary practice. There is a mood both ancient and relevant that issues from the dark layers of synthesizers, piano, vocals, and percussion. It sounds like bits and pieces of things you may have heard before; half of this and half of that, and half of something else too.