A band called Bright Little Field put out an album of Replacements covers using the ukulele as the primary instrument of conveyance, Treatment Bound: A Ukulele Tribute To The Replacements.  It's difficult to really grade something like this because, through Bright Little Field's reinterpretation of a selection of Paul Westerberg's much-revered catalogue, what you get is only confirmation of the music's quality, the mere presence of amplification proven inadequate without good songwriting to make it worth something.  An obvious conclusion considering the source material. 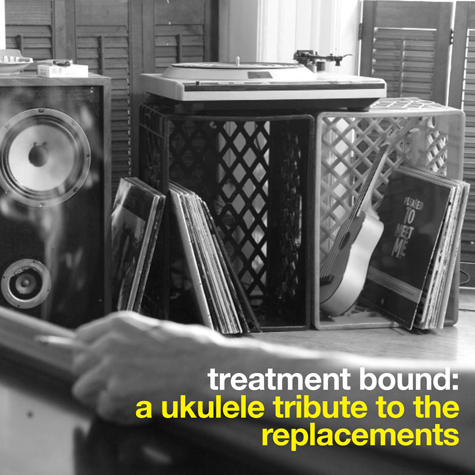 Bright Little Field is Jonathan Bright and Tim Littlefield, hence the clever band name, and they do a respectable job with the music.  "We're Comin' Out" and "I Will Dare," two of my favorite songs from Let It Be, are played with necessary gusto and an awareness of sonic limitations.  Overt country flavor manifests with certain treatments, though, the blues-borne Exile On Main St. swagger of "Treatment Bound" for instance feeling less like a rock song.  This of course is just resultant of BLF's reliance on their instrument of choice, its very spare and tuneful sound distilling Westerberg's song structures and revealing much about his influences.

Selections include songs from Hootenanny, Let It Be, Tim, Pleased to Meet Me and Don't Tell A Soul, excluding The Replacements' early hardcore output, which laid to rest my hopes of hearing "Fuck School" as a ukulele tune.