Swarm of Arrows: Lesser is More... 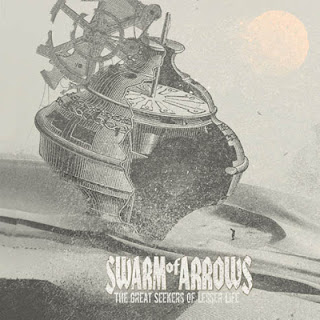 A macabre oxymoron sung overtop a slowly climbing line of fretwork, I can easily accept its logic as the words are driven through Wino-sized guttural modes of conveyance and a coupled attack of riff and stomp. Here is when “rock” meets “metal” and both embrace, content to enhance their respective gifts (as corny as that sounds) and generate a healthy dose of head-knock and hip swagger. You certainly hear that in the following track, “Chasing The Deathstar,” placed second in The Great Seekers of Lesser Life, the new album from Philadelphia metal band, Swarm of Arrows. They swing, they bend and they break when necessary, tapping into some of the more progressive elements of Mastodon, the rugged aggression of St. Vitus, some of the jazz-oriented guitar/drum combos of Helmet, (most notable in “Damage Generator,” though they inject the device with a heavy dose of speed) and vocal melodies employed by Alice In Chains.

“The Sky Will Save Us All,” which is one of the album’s strongest moments in terms of tone and melody, demonstrates a want to incorporate musical intricacies as well as unbridled aggression. Vocalist/guitarist Keats Rickard’s throaty narration is evocative of Dave Mustaine in “Dawn Patrol” or Phil Anselmo in “Shedding Skin.” An expected onslaught of “loud” occurs that doesn’t come off as cliché or tired, a clear utilization of tried and true methods being well appropriated.

What struck me about The Great Seekers of Lesser Life the first time I listened to it, is that there don’t seem to be any gaps in terms of where Swarm of Arrows has incorporated their influences, whether it be 70s sludge rock, 80s thrash or even grunge. And the band has no qualms making this known, but it’s not to their detriment. “Rustmaker,” an underlying cello quivering beneath its introduction, is a perfect marriage of many of these era specific elements: riff-driven verses, more melody in the hook, softened edges at the bridge. “Illuminate,” beginning as a quick to the point, high tempo and seemingly simplistic metal track, transitions into a wildly circular exercise in dexterity, taking seamless liberties with rhythmic shifts in the space of two and half minutes.

To that point, the songs are mostly pop length. While I won’t accuse the band of “jamming econo,” there is something to be said for how much Swarm of Arrows can inject into a three-minute song in terms of time signature and transition without overdoing it or being flung into the trappings of self-indulgence and pretension. Even in rock, there is a tendency to dismiss the presence of academia in music, likening “proggy” embellishments to the elitist sophistication of composers or musical scholastics.  I do think for metal fans there tends to be more forgiveness and certainly more of a threshold for any kind of exploratory musical tangents or over-the-top attempts at grandness.  The sturdy construct and the well-suited persistence of vision herein allow the band to get across as much as possible in as clear and concise a way as they're able.

But, whatever progressive elements Swarm of Arrows indulge, there’s enough metal-as-evolution-of-blues riffing, too. Songs like “Floaters” and “Hollowcast” revel in amplification, “Gravel and Gold” chugs with High On Fire caliber sludge and “Little Marching Vipers” exudes doom-laden sonic vitriol and possibly establishes a Neurosis connection a la its momentary interlude of ritualistic drum circle. The aforementioned “Damage Generator,” (drummer, Tim Lynam featuring prominently), is an off-register speed metal track offering one final thrust of metallic heft before “Breath of the Hourglass” ends the album in an appropriately somber way, its last series of drum-addled guitar arrangements carrying to a close.

A free download of the album is available on Black Friday, November 23rd.