- December 11, 2012
There's a new Foot Village album coming out in March of 2013 called Make Memories and it'll be up for presale the day I turn 36, which is the end of the world (12.21.12).  There's a live performance of the song, "This Song is a Drug Deal" below along with a trailer for the album and a sampler, which will cost you the price of your email address.  All these gifts are courtesy of Northern Spy Records.

Foot Village - This Song is a Drug Deal from 4eyes Media on Vimeo.

2013 marks the glorious return of Foot Village as they unleash their fourth full-length, Make Memories on Northern Spy Records. The album doesn't hit stores until March, but the band has just leaked the album art, the tracklist and a new whacked out album trailer. Check it all out below along with the free Foot Village music sampler.

Make Memories start on the Mayan End of the World, 12/21/12. They’re being damn mysterious about it actually. There’s talk of exclusive remixes being given away with the pre-sale, but someone else told us we had to beep some guy in fresno to hear the record before street date. All we know is they got something special planned just in case December 21st is the end.

See ya on the other side! 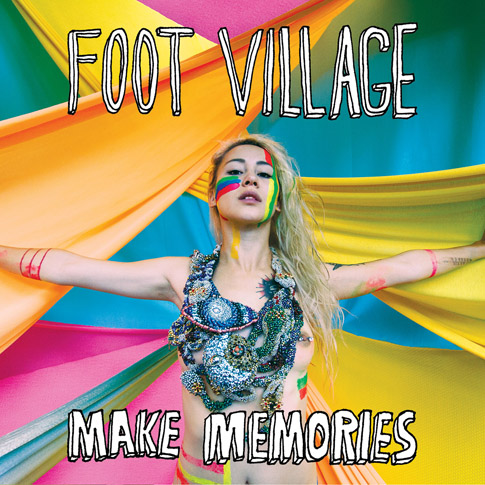 Until now, Foot Village has worked in the genre of fantasy. Their first three albums constituted a trilogy, telling the abstract story of the first city formed after the apocalypse. The city rose. The city reached glory. The city fought wars. The city crumbled. Now Foot Village has returned from this world of fantasy to our own. Both in the form of a warning and hope. As always, their message travels on the sound of a horde of drums (in fact, there are four drummers in the band); their voices chanting cryptic riddles too catchy to ignore. Known as Citizen's Kinsman, Lee, Taylor-Fantastic, and Rowan, now joined by Citizen Loveridge (of Beak>, Fairhorns) as well. While their last album, Anti-Magic, maintained an almost constant ballistic level of energy to tell it's story of war, Make Memories finds the group working in the form of ballads, alongside their kraut-punk roots. Foot Village's messages of hope are as exciting and ecstatic as ever, but their warnings are a swamp, slowly being brought to a boil. Recorded and mastered by Rik Dowding at Portishead's studio in Bristol, UK, Foot Village's fourth album Make Memories, captures the power of their live show unlike any of their releases previous. Rich with a cool, dark atmosphere, while still maintaining an upfront and powerful presence. This is the album for those wanting to take home the strength and magic the band has displayed playing at fests like All Tomorrows Parties, touring all over the US and EU, and opening for bands like Avey Tare, Dan Deacon, and HEALTH.