- December 14, 2012
Back in August, I posted a live cut from A Fucking Elephant called, "I'm Addicted to Drugs and Sex and I Want You to Choke Me," which is the A-side for the band's upcoming new 7," the imaginatively titled, Seven Inches of A Fucking Elephant.  For the sake of avoiding redundancy, I'm just going to post release info and cover art instead, which was lovingly provided by the wonderful individuals at Earsplit PR. 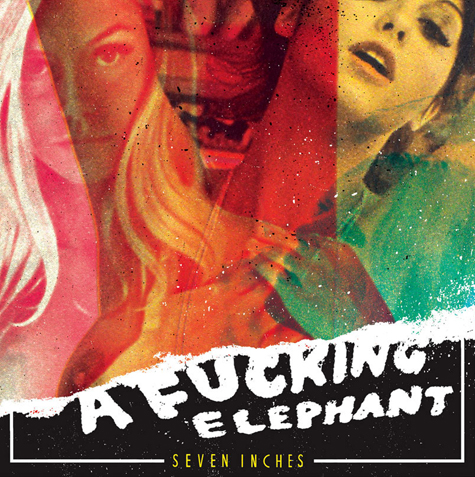 Kinky riff-twister duo A FUCKING ELEPHANT has completed its latest batch of percussive auditory penetration, and is preparing to drop the Seven Inches 7” on January 22nd.

The New Jersey-based twosome hammered out two gnarly new tracks with engineer Colin Marston (Krallice, Dysrhythmia, Behold… The Arctopus), which will end a two-year release gap, the last new material having been captured on A FUCKING ELEPHANT’s split full-length with cohorts El Drugstore nearly two years ago. As with the split, Seven Inches will pop out on Nefarious Industries, the indie label formed by deviants from both bands. The wax pressing will be limited to 500 copies overall -- 250 on black vinyl and 250 on yellow -- in addition to the tracks being available digitally.

Get freaky with the artwork for Seven Inches, created by Eric Nyffeler/Doe-Eyed Design, live footage of “I'm Addicted To Drugs And Sex And I Want You To Choke Me” -- the a-side of the 7” -- and other AFE tomfoolery RIGHT HERE.

Simply but aptly comprised of guitarist Matt Keys and drummer Greg Meisenberg, A FUCKING ELEPHANT has been assaulting basements and forcing acoustic trauma since 2007. In conjunction with Seven Inches slipping out, A FUCKING ELEPHANT will pack up the shrimp boat and set sail on a stateside tour in support of the wax attack. With the final few engagements of this latest DIY venture still being locked down, the tour is set to molest a total of seventeen cities throughout the East Coast and upper crust of the Midwest, with things getting greasy with a semi-local kickoff show in New Brunswick on January 4th.

Seven Inches of A FUCKING ELEPHANT Track Listing:
side A: I'm Addicted To Drugs And Sex And I Want You To Choke Me
side B: A Bunch Of Good Looking Roundeyes