- January 14, 2013
The release of Pissed Jeans' upcoming new album, Honeys, is quickly approaching.  "Bathroom Laughter," which was the album's first single, was posted back in November of last year and will now be accompanied by their latest single, "Cathouse."  The track has less their usual Jesus Lizard scratch n' riff and more a good time punk rock bounce to it.  Still entices well enough. 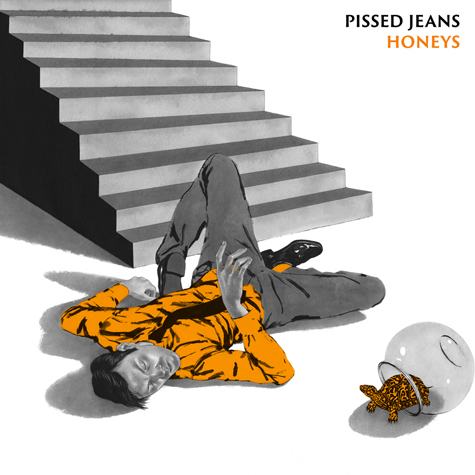 Plus: “Cathouse,” the second single from the new Pissed Jeans album Honeys, is now available.

Download “Bathroom Laughter” here.
Pissed Jeans will take their unpredictably raucous live show on the road this spring to support their stellar 4th album Honeys, out this February on Sub Pop. The tour begins April 12 in Washington, DC at Black Cat and currently ends on April 20 in Madison, WI at Der Rahtskeller (at University of Wisconsin). Additionally, the band will play a hometown album release show on February 15 at Underground Arts. There will be additional tour dates announced soon. Please find a full list of tour dates below.
In equally exciting new, Sub Pop is now offering a free download of Honeys second single, “Cathouse.” An ode to feline allergy sufferers everywhere, “Cathouse” is a pummeling, 2 ½ minute punk rock jam that does not disappoint.

Pissed Jeans’ Honeys will be available February 12 on CD, LP and digitally via Sub Pop. The album, which features the singles “Bathroom Laughter” and “Cathouse,” along with stand-outs “Health Plan,” “Loubs” and “Teenage Adult” was recorded by Grammy-nominated producer Alex Newport at Milkboy Studios in Philadelphia.