- August 14, 2013
Following the very good Forever Abomination, Skeletonwitch is releasing a new album, Serpents Unleashed.  "Burned From Bone" is the first track/video to surface online, preceding the album's release date of late October.  Lots of time to wait, but 2013's been flying by, so I think October will be here before we know it.

Kurt Ballou and John Baizley always seem to have their hands full these days. 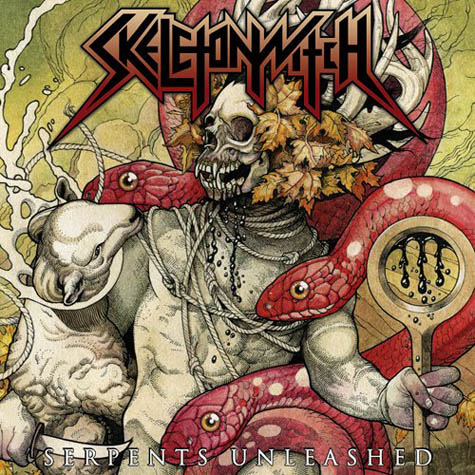 Currently celebrating ten years of blackened metal, SKELETONWITCH are proud to unveil details about their most venomous release yet -- Serpents Unleashed. Set for release in North America on October 29 (October 28 EU/UK, October 25 Germany), the highly anticipated follow-up to 2011's critical-lauded, Billboard-charting Forever Abomination was recorded earlier this year at GodCity Studio with Kurt Ballou (Converge, Trap Them, High on Fire), who expertly channeled the band's colossal live sound into eleven blasts of abominable, frosty fire. Serpents Unleashed features cover artwork by John Baizley (Baroness, Kylesa, Kvelertak), who returns to the 'WITCH fold for the first time since 2007's Beyond The Permafrost.

Today, new track "Burned From Bone" -- which the band debuted earlier this year during a headlining set at Pitchfork's "Show No Mercy" showcase at South By Southwest -- premiered on SiriusXM's "Liquid Metal with Jose." The song is available now as a free* download by texting SERPENTS to 24587. Behind-the-scenes studio footage of the band recording the track at GodCity can be view at THIS LOCATION.

Serpents Unleashed Track Listing:
1. Serpents Unleashed
2. Beneath Dead Leaves
3. I Am Of Death (Hell Has Arrived)
4. From a Cloudless Sky
5. Burned From Bone
6. Unending, Everliving
7. Blade On The Flesh, Blood On My Hands
8. This Evil Embrace
9. Unwept
10. Born of the Light That Does Not Shine
11. More Cruel Than Weak

Preorder Serpents Unleashed digitally via Bandcamp now or physically on CD, audio cassette, three different 180-gram LP variants (black, clear or red) and a limited-edition 7-inch collector's box via http://www.skeletonwitch.com. Also available for pre-order now is a new vinyl pressing of Beyond The Permafrost, which is back in print on 180-gram black vinyl as well as a new 180-gram clear vinyl variant.

Over the past decade, SKELETONWITCH has toured extensively throughout the U.S. and Europe with a who's who of modern heavy metal in addition to leveling some of the genre's largest festivals (Wacken, Graspop, Summer Breeze, Ozzfest, Tuska, Bloodstock), in the process gaining a dedicated legion of fans on both sides of the stage. The band recently completed a successful run of high-profile dates opening for Sweden's Ghost B.C., a group they will again perform alongside this fall. Additional fall tour dates will be announced later this week.