Alt-Rock and a Flux Capacitor: Ovlov's Am 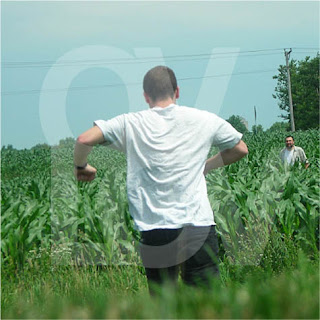 Yuck released their self-titled debut in 2011. It didn’t seem much of a coincidence that, following the 20th anniversary of Nirvana’s landmark release, Nevermind, a newly plaid and purposely faded crew of guitar-oriented 90s gazers would become the talk of the web for a little while. It also wasn’t much of a surprise when more and more of these bands began to emerge in the wake of dubstep and garage revivalism. It’s the perfect time for these bands to come out because Gen X-ers brought up hearing Dinosaur Jr. or Sonic Youth during their formative years are primed to look back and remember when. I myself, though subconsciously enthralled to hear a band like Ovlov on my stereo, have difficulties reconciling my want of music to move forward while my ears filter the sounds and fond remembrances of my most visceral listening experiences as an adolescent abound. This is the paradox of Ovlov’s new album, Am.

At its core, the Connecticut sometimes-trio, (Ovlov has a revolving personnel for Am), piles on the sonic mud like a cassette in the red, a warm and distortion-rich sensibility that’s enabled by guitars that crunch and vocals that harmonize or go alt-blues J Mascis style down to their very inflections. In the same way The Men managed to equalize forty-something years’ worth of rock n’ roll history within the confines of their 2012 album, Open Your Heart, Am bridges the gap between Dinosaur Jr.’s You’re Living All Over Me and Sebadoh’s Bakesale, utilizing the gifts of slacker prone harmonies (“Grapes”) and impassioned six-string wailing (“The Well”) throughout.

Am, though, is a great listen. In spite of the fact that the album plays like a who’s who of MTV Buzz Clips and Alternative Nation fodder, it’s difficult to deny the legitimacy of the semi-charred pummeling offered with “Nu Punk” or the Nada Surf/Weezer-bent of “Where’s My Dini?” Even if one were to categorize Ovlov as a throwback plain and simple, theirs is a very studied and respectful interpretation of 90s Alt-Rock, fully realized with pop hooks and buzzing guitar solos. “Milk,” by itself, could’ve existed twenty-plus years ago, a frayed sleeve running across those slack-jawed guitar strings and the vocal perfectly aged in that contradictory brine of indifference and purpose.

But, in the midst of all this nostalgia, it’s not difficult to lose Ovlov. As the band’s identity seems secondary next to its influences, the song “Moth Rock” becomes their best attempt at crafting said identity, a very cohesive synthesis of the Alt-Rock idiom and their own melodic and rhythmic sensibilities. This isn’t to say that Ovlov’s allegiances disappear, but they at least bury them a little better. The same could be said about “Blue Baby,” whose Dirty-era Sonic Youth lifts, though apparent, melt away once the melodies are engaged. “There’s My Dini,” however, is Pixies down to its bass line.

And that is the rub. While Ovlov’s debut owes a great deal to albums and performers past, you can hear transition and progress. The era’s preserved and the blueprint’s fully mapped out and ready for inspection: pick and choose, extract and use. But, there needs to be perspective. As we saw with any subsequent Strokes/White Stripes offshoot that figured out how to “vintage,” it’s easy to follow a recipe. Once that recipe is completely understood, fuck with it. Make it yours. Don’t revisit without reconsidering and certainly don’t revive without reinvigorating.