Kicking Against The Pricks (Sorta): Sunn O))) at the Union Transfer in 2012

- September 05, 2013
A year ago today, I attended a Sunn O))) concert at the Union Transfer in Philadelphia. The experience was to be written up and submitted to Kicking Against The Pricks as a concert review, but that didn't happen. Kicking Against The Pricks has been, unfortunately, inactive for some time now, so the review was never published online. Call it self-indulgence, but I figured it would be cool to publish the review here as it's been a full year since the show.

I’ve found it difficult to explain in as succinct a way as possible how Sunn O))) works as a concept, let alone as a band. The sonically dense and intensely austere duo formed by Stephen O’Malley and Greg Anderson have constructed a ritualized expression, allowed to transmit to live audiences via ominous and enormous drones that don’t seem possible to consider until you experience them. The albums are one thing, but when your ribs rattle and your clothing actually vibrates off of your skin, you know that you’re being slowly injured over the course of an hour and a half, treated to inhumane decibels that make even earplugs seem worthless. 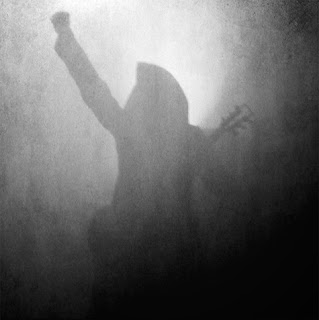 But, the spectacle is intense and mesmerizing. If not for the extremity of Sunn O)))’s very strange and rather brutal dynamic, it would be easy to write them off as pretentious and dull, their complete disregard for melody or rhythm as absurd as Free Jazz’s disregard for structure. This thought occurred to me while I was watching them Wednesday night at Philadelphia’s Union Transfer, my hands resting on the stage and witnessing the shock of every pass with a guitar pick. Robed silhouettes stood against blue light, smoke having filled the hall so as to provide the group cover. Between the sound and the air, the crowd was riddled with pollutants.

Priming the audience earlier that evening were Philadelphia-based T.O.M.B. and the grindcore band, Dead In The Dirt, who are signed to Anderson’s Southern Lord Records.

T.O.M.B. generates creepy ambience. For the length of their set which consisted of one extended piece of… something, their vocalist, his head wrapped up in a hood while his sinewy chest stay bare, mused extensively about what I assumed to be scary stuff. I couldn’t really tell, as his words were rarely narrow enough to trespass through the barrier of feedback and effects his band were creating, which weren’t terribly dynamic. The guitar player didn’t play his guitar, instead holding it in front of the amplifier so it would shriek and howl. Many knobs were tweaked over the course of T.O.M.B.’s set, the hooded frontman’s left arm at a constant upward angle, his hand held cupped so as to readily accept a crystal ball or a goblet.

After ten minutes of T.O.M.B., I was ready for Dead in the Dirt, who have annihilative and dexterous ways of putting their music across. Being the closest band to be a band that night, (from a conventional or traditional definition), Dead in the Dirt enjoy grindcore immediacy and crust punk nods at dance-ability. It’d been their first time in Philadelphia, and thanks were given midway through the set. The crowd seemed to be into them, though no pits developed. An all-ages show? Grindcore and no pit? Couldn’t say I was expecting Dead in the Dirt to be received with such polite applause and so little interaction. Either way, the band exhibited the desired primal attack, rhythmic and percussive ridiculousness with plenty of adrenaline.

After Dead in the Dirt finished their set, I cut a path to the front of the stage so I would see everything. Clouds were pushed out of the smoke machine over the course of thirty to forty-five minutes as it’s all part of the charm that Sunn O))) be visually obscured by lighting and smoke. It’s required that participants deal with being inundated in one way or another. By the time O’Malley and Anderson walked out, all you could really see were faint blocks of robed bodies gliding into position and guitar necks breaking up their forms. A third member, Tos Nieuwenhuizen, accompanied the band on a moog and vocalist, Attila Csihar, his face caked in some kind of glistening wax mask, offered his throat to the mire. The four of them didn’t break character, O’Malley and Anderson either lifting their guitars to the sky as if offering their instruments to some drone deity, or launching into heavy chords and reveling in the reverb. Csihar was at a crawl, his movements slow, his head at a constant downward nod. Communal bottles of unknown liquid were traded among members, another ritualistic element brought into Sunn O)))’s brand of theater.

Once the noise faded, the lights were turned on and the foursome took a bow and expressed their thanks. Oxygen was welcomed after walking out of the venue and a quiet drive home offered a chance to recoup.