What I Heard This Morning: Tanger Trio & Ensemble Mondaine

- September 06, 2013
Lush and calming instrumentals steeped in the tradition of jazz and classical composition, I give you Tanger Trio & Ensemble Modern.  I received a press release a couple days ago from Seriés Aphōnos/Bronze Rat Records about the group's self-titled album (which is now available) and the couple tracks I heard are gorgeous.  Involved with this project are Hansjoern Brandenburg (the head Tanger, so to speak) and Thomas Wydler of Nick Cave & The Bad Seeds fame. 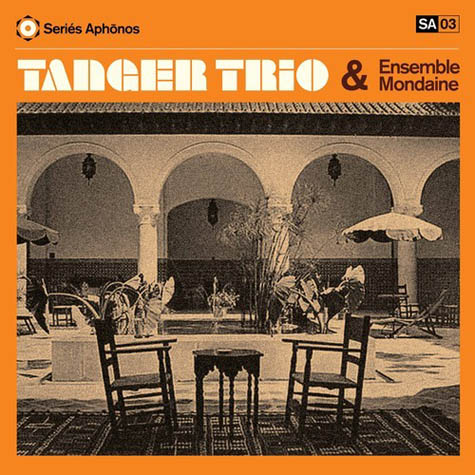 OUT NOW on deluxe, limited 12” LP (w/ CD) and all digital platforms.

An original album of resplendent beauty by some of Berlin’s most prized and sought musicians, this album's cinema noir-esque mood mixed with modern classical & jazz is a rare treat.

Tanger Trio is the brainchild of Hansjoern Brandenburg, who imagined escaping the cold gray Berlin winter on musical flights of fancy to the African Med.

Brandenburg earned his stripes as musical director to Tom Waits’, William S. Burroughs’ and Bob Wilson’s production The Black Rider, going on to arrange works for Kronos Quartet and Tiger Lillies, and called upon by Bob Wilson regularly to supervise the music of his theatre productions. A regular fixture of Berliner Ensemble, his recent work includes the arrangements and supervision of CocoRosie’s Peter Pan production in Berlin.

His right hand man in the Trio, on drums and percussion, is Thomas Wydler, the longest serving member of Nick Cave & The Bad Seeds after Cave himself, and a driving creative force in their most recent career-defining Push The Sky Away record. A long-standing Berliner since the early 80’s, Wydler defines the city’s history of artistic musical freedom, and has several solo albums and film music soundtracks under his belt.

After the sudden death of original bass-player Sirone Jones, an American jazz legend who played with everyone from Mingus to Gil Evans to Sun Ra, and who appears on 2 of the albums tracks, the Trio was completed by member Andreas Henze, who lists Berliner Ensemble, Rufus Wainwright and Herbert Groenemeyer amongst his employers.

Ensemble Mondaine comprises of woodwind, strings and voice and is made up of celebrated musicians from Greece, Egypt, Germany and France. The European/Mediterranean flavour they add to the trio is the real thing.

Impeccable credentials aside, this album is a cinematic aural delight.

They will perform the album at a special one-off concert at the world-famous Berliner Ensemble on September 6th. Buy tickets here.

Sincerely,
Letters From A Tapehead
composer ensemble jazz single what i heard this morning