A meditation based in the premonitions of death detailed in a text from a Polish alchemist, A Water Which Does Not Wet Hands, the exploratory endeavor of which belongs to Agarttha (Architeuthis Rex’s Francesca Marongiu with the assistance of bandmate Antonio Gallucci and Reto Mäder of Ural Umbo and Sum of R), is supplemented by vastness and slow swells of droning instrumentation while ritualistic thuds confirm the music’s depth of space. From the opening “Lambsprinck,” distortion acts as a sonic tapestry from which to adorn each track vocal melodies that drape and flow as endless streams of sound. This characteristic is carried out for the duration of the album, Marongiu angelic against its otherwise ominous persuasion. 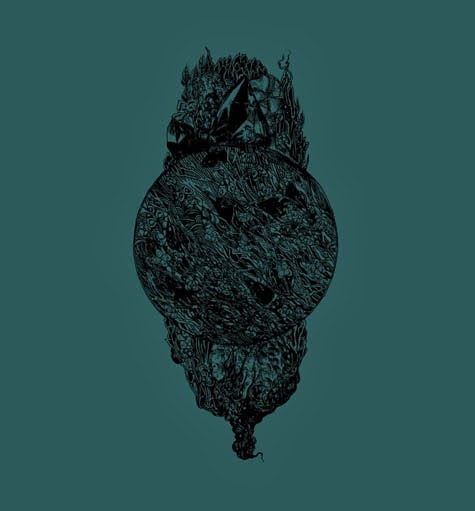 Tonal droplets color the steady field of wavering fuzz that remarks as dread throughout “Visions of Alina,” a gentle skip of percussion establishing its path. Though dreamy and mellow, there’s a metal connection here which makes itself apparent toward the last closing minutes of “Melusine,” a riff, though allowed to breathe, adds some gravity to its light, haunting strut. It’s the type of sound that’ll wake you from your trance, a calm suddenly immersed in anxiety.

A flip of the platter and “The Sphynx” pulses with a foreboding air and one of the stronger drum rhythms on the album. Shocks of chiming tones radiate. The chords of an organ are pressed into the “Storms As He Walks” as bells are tapped and static is strummed from a guitar. Waves of undulating sound emerge and a psych-laced and fuzzy tone harmonizes with Marongiu, allowed to improvise a little over the track’s cyclical motion.

A rumbling flatline of a bass note introduces the album’s final track, “Chymische Hochzeit,” a clean snare drum and icy cymbal splashed as Mäder’s fingers fall upon piano notes. Probably the most collaged song on the album, “Chymische Hochzeit” ties together its eerily droning bottom with the glowing embellishments that grace Marongiu’s vocal. The heavy dream is softened, made beautiful in spite of the chill that occupies Agarttha’s head, closed eyes revealing something both musically brilliant and captivatingly dark.