- November 01, 2013
As an early birthday gift, my brother bought us tickets to see Goblin play at the Troc on December 12th. Opening that show will be Zombi, whose first three albums are being reissued by Relapse Records in January of 2014: Cosmos, Surface to Air and Spirit Animal. Pre-orders can be made below. 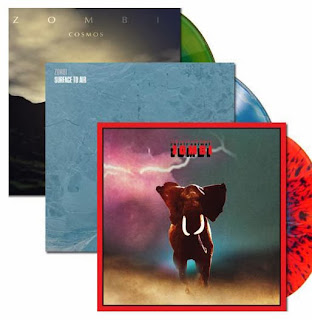 In celebration of their recently announced tour with Italian soundtrack kings Goblin, Relapse Records will be reissuing three long out-of-print LPs from Pittsburgh, PA's progressive wizards, ZOMBI. The groups now classic albums, Cosmos, Surface to Air, and Spirit Animal will each be available on deluxe vinyl on January 7, 2014 and can be pre-ordered from Relapse Mailorder HERE.

Their 2004 Relapse debut Cosmos will be reissued as a double LP for the first time in almost a decade, while 2006's Surface to Air will be reissued as a single LP for the first time in North America. The last of these reissues, 2009's Spirit Animal will be released as a gatefold double LP and will include the bonus track "Infinity," not included on the first pressing. These titles along with other ZOMBI releases are available for streaming via the duo's Bandcamp page HERE.

Their first US Tour in almost seven years, the 13 day trek kicks off on November 29th with a solo show in Chicago, IL and wraps up on December 14th in Carrboro, NC. A complete listing of dates is included below.

*Not with Goblin - openers TBA