So, if you're looking for a specialized album and you're really into helping pets, look no further:  Skeletonwitch, are issuing a limited-run, hand-screened 180-gram version of their 2013 release, Serpents Unleashed.  All proceeds are going toward pet shelters that reside in and around the general vicinity of the band's hometown in Ohio and will be available to purchase on January 20th.

Listen to the band discuss it in the video below:

Skeletonwitch will also be on tour with Amon Amarth beginning Friday, January 17th.  Tour dates along with more info on the limited Serpents Unleashed is brought to you courtesy of the always wonderful people at Earsplit PR. 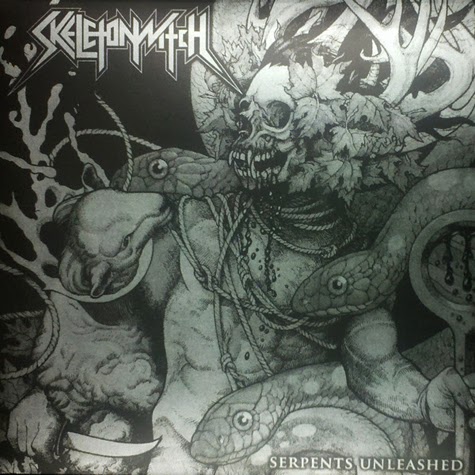 SKELETONWITCH will release a hand-screened, 180-gram limited vinyl edition of their acclaimed, Billboard-charting 2013 release, Serpents Unleashed, of which 100% of the proceeds will be donated to two animal shelters in the band's home state of Ohio -- The Athens County Humane Society and Columbus' Pets Without Parents. The members of Ohio's most-loved heavy metal group have always been proud pet owners and are excited to raise awareness and support for two no-kill organizations in their region.

Limited to a one-time-only pressing of 100 copies, the black LP includes a hand-screened, hand-numbered jacket with exclusive artwork and a hand-screened dust sleeve. It comes with a color poster and a sticker showcasing the album's original masterful artwork by John Baizley (Baroness, Kylesa, Kvelertak), as well as a download card. Mark your calendars, as the limited-edition LPs will go on sale on a first-come, first-serve basis exclusively via http://www.skeletonwitch.com on Monday, January 20th at 1:00pm EST.

Find out more information direct from the band HERE.

Praised for being their most potent album to date, Serpents Unleashed appeared on countless year-end "best-of" lists (Decibel, Metal Injection, etc.) due to its "relentlessly intense, in-your-face brutality" (Metal Assault). After touring North America extensively in the fall with The Black Dahlia Murder in addition to performing a select number of shows alongside Ghost B.C., SKELETONWITCH will continue to support the release, joining Amon Amarth and Enslaved on a US run that starts this Friday in Las Vegas. Soon after, the group will make their way to Australia for the first time to tour alongside Toxic Holocaust. The band's complete tour schedule can be found below.