- May 19, 2014
Chameleon-esque sludge rockers Boris are putting out a new album later this June called Noise.  Lots of hope in that title and some evident delivery.  The band just issued a new video called "Vanilla" that is anything but: a pop-conducive hook flanked by post-hardcore nuance and a gratifying solo-laden stride as its second act.

The video was pulled from Stereogum and all the info was provided by Us/Them Group.

The band's 2011 releases, Heavy Rocks and Attention Please, were reviewed at No Ripcord. 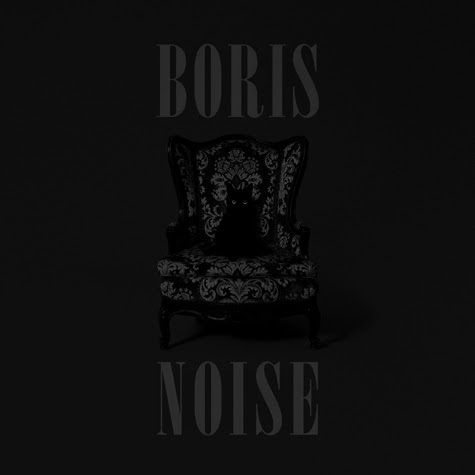 Japanese trio BORIS premiere the first video from their forthcoming first official album in three years, titled Noise. The band shares the clip via Stereogum, which is available to watch/share HERE.

The trio debuted the first album track "Quicksilver" recently via Pitchfork, which is available HERE.

BORIS has always demolished expectations of what a band can do musically and aesthetically. In keeping with that tradition, they again flip the script by serving up their most all-encompassing effort to date. Noise is an amplification of BORIS' endless pursuit of musical extremes while moving aggressive, intense rock into new territories.

In writing Noise, BORIS was intent upon condensing all that the band had explored over the years, in order to create something more bold, streamlined and powerful. And, upon completion, the band considers Noise its most defining effort, stating, "If we had to suggest just one album for those unfamiliar with BORIS' music, we will pick this for sure." That's a bold statement from a band having released over 20 albums covering a vast array of sounds. Yet somehow throughout the album's 8 song, 58 minute duration, the band masterfully intermingles sludge-rock, blistering crust punk, shimmering shoegaze, epic thunderous doom, psychedelic melodies and just about everything else they've ever done.

Over the course of BORIS' three previous Sargent House albums (Heavy Rocks, Attention Please and New Album) the band sought to expand its musical vision ever further. And, the results helped redefine the band's already iconoclastic sound. However, in early 2013 they decided to return to their classic trio lineup moving forward: drummer/vocalist Atsuo, guitarist/vocalist Wata and bassist/guitarist/vocalist Takeshi. Having been able to explore many new ideas as a quartet in recent years, the band was concerned about logistics, until their very successful residency shows and tour in the U.S. convinced them that BORIS could return to the simpler, solid trio without sacrificing artistic growth. Now, having rebuilt the classic trio's "equilateral triangle" they're heavier, louder, more confident and incisive than ever before.

Noise is also lyrically the band's darkest album to date. Bleak lines like, "throbbing pain this world repeats upon us/ Throb, throb / Throbbing pain, this world makes us suffer," guide the record's most musically upbeat track, "Taiyo No Baka." Everywhere else, dark imagery permeates the songs, adding further weight to the proceedings. Kicking off with the fittingly titled "Melody", the album begins with the uniquely BORIS sound that combines multiple elements into one ferocious metallic-punk-melodic whole. Things take a jagged turn with second track "Vanilla" exhibiting a more experimental edge, while still driven by vocal melody and arpeggiated guitar notes until the song juts into frenzied psychedelic metal riffing. Elsewhere, with Wata on lead vocals, "Heavy Rain" merges the band's early colossal doom with the latter day shoegaze of Attention Please for a song that's both brutally heavy and ethereal. "Quicksilver" is a wailing speedcore track reminiscent of classic Japanese hardcore, with screaming voices, screaming guitars and screaming drums that refuses to relent over the song's first 7 minutes. "Angel" is the album's nearly 19-minute epic centerpiece that builds from entrancing chiming guitar notes and softly pulsing toms, ultimately breaking into a massive wall of drop-tuned sludge and a howling guitar lead reminiscent of BORIS tracks "Feedbacker" and "Flood." The song continues to shift gears several times as it builds in tension and emotion toward a very satisfying resolution, taking the entire track full circle to where it began. Throughout, Noise is an exploration of the free-spirited experimentation that made the band an International cult legend.

Noise will be heard everywhere (excluding Japan) on LP, CD and download via Sargent House on June 17th, 2014.