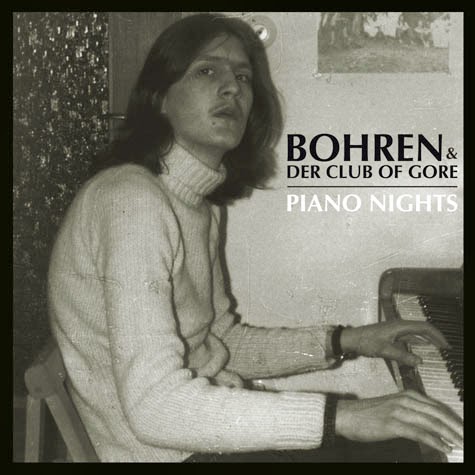 When thinking of the term "strict," the mind normally directs itself to moments when you felt stifled, the desired freedom, a wish for unbridled allowance of personal exploration and unlimited inconsequential hell raising, limited in time or intensity by an authoritarian presence hellbent on denying, denying, denying, but for the purposes of "YOUR OWN GOOD." "Strict" has that negative connotation, its first usage in a human's memory applied to upbringing and discipline.

Strictness, though, isn't always the boundary-addled pain in the ass it appears to be, at times a frame of mind that either enables one to succeed through hard work or defines numerous parameters within which one can create. Crafting a relatively solid and impenetrable framework, for instance, the dark jazz quartet known as Bohren & Der Club Of Gore, take a traditionally improvisational artform and control it within the context of patient tempos and enveloping sounds, maintaining a signature tone and pace essential to their make-up. In 2002, Bohren & Der Club Of Gore released Black Earth, an album that I'd pondered for miles and miles over countless commutes that year, absolutely enthralled with the beauty the group were able to conjure amidst these hyper-slow and cavernous modes of aural chill. Macabre songs titles like "Destroying Angels," "Skeletal Remains" and "The Art Of Coffins" made Black Earth the most metal non-metal album I'd heard, as dark as any occult rock outfit prone to muse over blood and bones.

While Black Earth remains a peak in the band's output, Bohren's latest album, Piano Nights, strives to surpass its excellence, though in a manner less bleak. While fiddling with a grand piano, saxophonist Christoph Clöser became inspired and began to create an album compositionally based around the instrument. However, as Bohren remains fascinated with space and the limitless anti-joy of low volume, any presence of something as high-scale as a grand piano would likely swallow all other instruments in its path. The solution was to utilize a Yamaha electric, maintaining signature loyalty.

And they do maintain that loyalty.

At first listen, “Im Rauch” won’t seem much of an advance musically, though it becomes apparent that the members of Bohren aren’t stalking familiar shadows. Clöser blows Paul Desmond-sized notes into the expanse, a vibraphone ringing as pianist Morten Glass graces the mix with a flurry of notes. A noir-ish mood, eerie sounds scraped and distant, the song sets a precedent that remains consistent throughout the length of Piano Nights, nocturnal conveyances in terms of time and place as opposed to things that go bump. From that standpoint, with Clöser’s gloriously melancholic tones and the remarkably spare percussion from drummer Thorston Benning, Piano Nights becomes more of a think piece, contemplative and emotive. Piano chords act as pillars, points of reference bearing weight as compositional scaffolding.

The meditative hold of this album is apparent once the second track, “Ber Rosarotum Licht,” makes use of the aforementioned brass. Through its lack of rhythmic consideration, enormity addressed by choirs of faded and droning voices sounding aloud, a distant presence is given air to breathe. Similar is “Irwege,” though this is strictly a piano piece and more demonstrative of Piano Nights’ intent.

The album’s centerpiece, though, (and absolute standout), is a streetlight serenade titled “Ganz Leise Kommt Die Nacht,” which apparently translates to “Night Comes Very Silent.” Three vibraphone notes precede a rather lush array of picturesque melodies that illustrate monochromatic afterhours motifs, an affectionate nod to those evenings rife with contemplation when every small noise is disruptive and every otherwise trivial observation is deemed an epiphany. It’s the type of orchestrated storytelling you want to listen to on those nights of stream-of-consciousness unrest, when the prospect of sleep has all but abandoned you for the few remaining hours of starlit blackness before the new day inspires protest.

While a sense of spiritual worship can be heard in something like “Fahr Zur Hölle,” its ceremonial bent likely fueled by the track’s glowing organ, Piano Nights doesn’t vary its mood a great deal. This might be the point at which the band’s strict approach proves somewhat of a detriment. While Clöser texturizes to some extent with Ayler-centric honking in “Segeln Ohne Wind” and some shaky pronunciation in “Verloren (Alles),” the sense of experimentation that had sparked the investigative nature of the album becomes lost. That’s not to say that Bohren’s efforts fail by any stretch: it can’t be denied the album, as a whole, is beautifully constructed. Melodically, though, there’s not enough at play to enhance what is a very established and essential rhythmic construct and it becomes easy to lose track of the music at times.

Still, its closing nine-something minutes, "Komm Zurück Zu Mir," leave the album soaring, a guitar making an appearance and the volume heightened.  The band finishes an engaging piece of work with an impassioned finale, speaking to the strictness with which they compose and perform, and to what degree they work to create something worthwhile.