Stereogum premiered a cover of the Urinals' "I'm A Bug," performed by the excellently charged and wildly distorted rock trio, METZ.  As with everything this band has committed to tape, the muddy distortion is prominent, the drums are exceedingly lo-fi and the energy is dialed up.  Apparently a follow-up to the band's self-titled debut is in the works, so we'll be on the lookout.  In the meantime, check out the track below and read up on some tour dates.  METZ will be playing traveling companions to Cloud Nothings for a few dates. 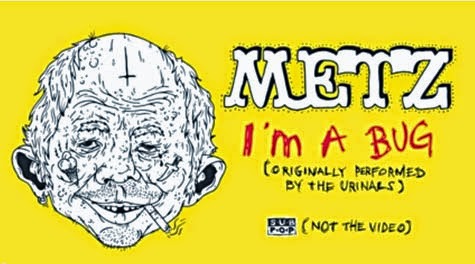 A link to the video and touring info was provided by Sub Pop.

The ever-mighty METZ have dropped a blistering cover of “I’m A Bug,” originally recorded by Southern California punk band the Urinals. Stereogum, who premiered the track had this to say, “I’m A Bug” is one many fine minimalist outbursts by late-’70s SoCal punk trio the Urinals, but there’s nothing minimalist about METZ. The Toronto trio are the latest to cover “I’m A Bug”...and they’ve turned it into one of their patented noise-rock onslaughts with typically bracing results. Which is to say: Like most METZ songs, this thing will squash you. (Like a bug, see?)(see premiere June 30th).”

METZ are hitting the road this week for a North American west coast tour with Cloud Nothings. The trek kicks-off July 2nd in Portland, OR at Hawthorne Theater and ends on July 8th & 9th with a two-night stand in Los Angeles, CA at the Roxy. METZ will then head to the UK for a short tour, beginning August 10th in North Yorkshire, UK at Beacon Festival and ending on August 16th in London, UK for ATP's Jabberwocky Festival at ExCel London.

METZ are currently hard at work on the follow up to their critically acclaimed, self-titled Sub Pop debut.