- July 25, 2014
As a study in how a band can synthesize well the decades of punk aggression, nihilistic pigfuck and fringe-worthy experimentation that's brought us into the new century, Portland's Big Black Cloud excels. In 2013, I was happily turned on to their then-new LP, Black Friday, which boasted one of my favorite singles of the year, the chewed-up and choked-out "Bomb My Brain." I recently revisited the album and I still think it's violent, strange and abrasive. Granted its lineage is easy enough to trace, but the band knew how to take the best of what their influences had to offer and run with it. I love what this band does.

So, I was really excited to find out that they're releasing a new EP in August called, Lessons in Fuck You 2. It's a cassette release, though it'll be available digitally, and preorder is up now. You can check out info on the release below and listen to a live cut of the song, "Cities of the Red Night," which appeared on a compilation called, Keep Our Heads — ALIVE!

And, Sun Ra is on the cover.  Yes, his head's been removed and thrown into a fire, but maybe that's kind of a nod? 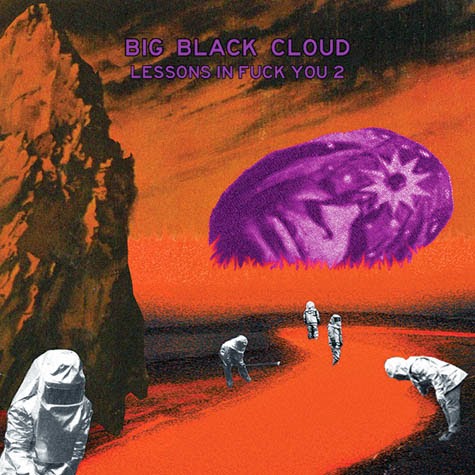 All info was provided by Earsplit PR.

You can read my review of Black Friday at No Ripcord. (This review was quoted in the press info below.)

Portland's furious sci-fi punks, BIG BLACK CLOUD, are back from the lab with their latest dirty bomb, the cassette EP Lessons In Fuck You 2. Tripling down on their intoxicating rarefied mix of punk, noise, psych, surf, and rock, the agita trio takes a dark trip that drives and swerves like a B-movie soundtrack through threat-level guitar attacks, groovy alien eviscerations, and goddamn-us-all-to-hell preaching.

Lessons In Fuck You 2 was borne of demo sessions recorded and mixed by Andrew Grosse of Caravan Recording (Drunk Dad, Tyrants, Tiny Knives) for the next BIG BLACK CLOUD LP, the record capturing the band in its own anxiety-fueled element, a rollercoaster ride through a collapsing amusement park of overdriven shout-alongs and untethered instrumentals. The recordings, done on location with a mobile unit in the underground lair of the The Fancy Fox, gave the ever-prolific trio a chance to work through a host of new and old ideas. Whether due to the (dis)comfort of their own space, nothing-to-lose abandon, or present states-of-mind, Lessons In Fuck You 2 finds the band in top form: frantic, pissed-off, and sinister as they further explore their own dark territory with off-balance grooves, instrumental street-race sex jams, and wild freakouts, jagged guitar and cracking drums glued together with rubbery bass overlain with can-you-hear-me-now yells. Fuck you too, thank you very much. Please keep your head and hands inside the ride.

Lessons In Fuck You 2 will see parole on August 5th, a cooperative release between Portland's heavy-vibing DIY label Eolian Empire and the band's own Stankhouse Records. Preorders for the cassette are available HERE and the digital version HERE.

Just days ahead of when the Lessons In Fuck You 2 tutorial is officially on the streets bashing in ears, BIG BLACK CLOUD's record release show will take place hometown scum-style on August 2nd with Eolian partners-in-slime, Towers. The gig will be immediately followed by an eight-city run throughout California, from August 7th through the 15th.

Check out BBC's battering live version of "Cities of the Red Night" from the KEEP OUR HEADS - ALIVE! compilation HERE.