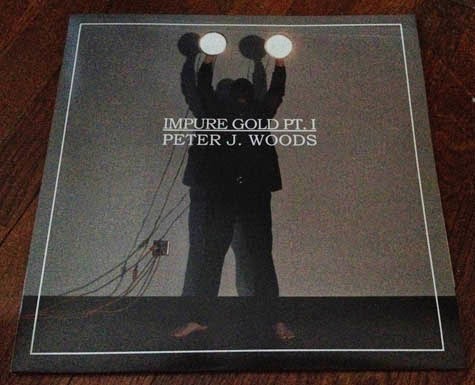 FTAM is a Milwaukee-based community of artists who perform and create experimental art, music and theater.  It's also the record label founded by noise artist Peter J. Woods, whose new album, Impure Gold Pt. 1, made it to my front porch a little more than a month ago.

Impure Gold Pt. 1, which is apparently one part of a larger, more involved project that Woods is crafting, is not what one would call a pleasant listen.  Woods combines indecipherable dialogue, incidental sounds, cacophonous fields of static or stinging sounds one could imagine a dog whistle producing were human ears capable of receiving its frequency.  In short: tension.  With "Empty Vessels," its distant quakes which assume the album's only true connection to percussion or any attempt at rhythm, its 12-minute length is, at times, difficult to endure.  As strange bytes of robotic commentary seem to combine like a herringbone pattern, an overlap that only permits short bursts of comprehension, clackety metal winding and then pause.  I'm reminded of Brian Eno and David Byrne's use of soundbytes in their "samplepiece," My Life in the Bush of Ghosts, a track like "Mea Culpa" generating a curious intensity as erratic words loop beneath its ominous motion.  Halfway through "Empty Vessels," an onslaught of white noise and high pitch ringing bury every other element.

With "Impure Gold" a voice shrouded in static yells as a heavy storm of noise runs its course.  In this instance, Woods seems to have something in common creatively with Gnaw Their Tongues's Mories, whose Aderlating persona has generated similar noise-centric unease.  (Check out the sickeningly titled "Dog Semen" for confirmation of this.)

The fifteen minutes of the closing track, "Notes from Within the Epicenter," are shrill.  A sinister voice speaks, barely audible beneath the high-frequency streaks of sonic howling and momentary blasts of white noise.

There's a pause in the maelstrom long enough to hear the voice say, "And then... it stops."

While Woods's mutations are unsettling with a purpose, the often grating intensity is, at times, trying.  Consequently, it's difficult to concentrate on much else and whatever content he wanted to communicate becomes secondary as audible mayhem runs prevalent.  Contextually, it would be interesting to experience the album as translated into its intended theatrical and/or multi-media variant.  By itself, though, it's not a great listen.