- September 05, 2014
Pretty excited about this one:  Atriarch will be releasing a new album this Fall called An Unending Pathway.  This will be Atriarch's first LP for Relapse Records.  The teaser single from the album, "Collapse," was released a couple days ago and it's a strong and enticing preview into the album, dark and chaotic at points, battered rhythm and chunky low end.  There's a ritualistic bent to it as well, the vocals somewhat ceremonial and the soundscape dense as if filling out a spacious hall or temple.

You can check out the track below and I would recommend reading the info I've posted, which was provided by Earsplit PR.  There are pre-order links as well. 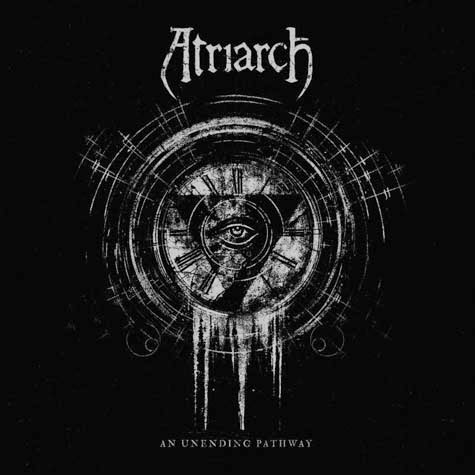 Hailing from the Pacific Northwest, ATRIARCH is a mesmerizing death/doom metal force encompassing haunting atmospheres and droning avalanches of ritualistic sludge, a living entity comprised of four parts, offering catharsis through sonic ritual. After two critically adored records on Seventh Rule and Profound Lore, ATRIARCH make their Relapse debut with their finest moment yet: An Unending Pathway. Fusing death rock, doom, black metal, punk and psychedelic drone/noise, ATRIARCH immediately establish themselves as one of the most creative and compelling heavy music bands of the twenty-first century. Imagine Bauhaus as covered by Eyehategod, or Sisters of Mercy filtered through Neurosis, and you begin to get the picture of what ATRIARCH has achieved. Recorded at Type Foundry in Portland, Oregon, produced by Billy Anderson (Sleep, Eyehategod, Melvins et al) and the band, engine-eared and mixed by Anderson at Everything Hz, also in Portland, and mastered by Brad Boatright (Sleep, Beastmilk, Nails) at Audiosiege, An Unending Pathway offers up seven cataclysmic soundscapes to your deepest darkest nightmares. Once every few years a band comes along that takes the familiar and creates something wholly new. ATRIARCH have done just that with An Unending Pathway.

"Our aim is to tear a hole in the veil that blinds us from our true selves," relays the band, "We are bombarded with ideals of a superficial shallow lifestyle, that we are enslaved to maintain. This veil has become so powerful and overwhelming that we ignore our spirits to worship our shells, as money stokes the fires that burns our immortal souls. Greed corruption fear and hate is the true face of this Self Serving way of life that we have come to call 'normal.' While we believe in opening our minds and expanding our spirits we cannot forget our ability to fight. The spiritual battle for freedom of mind and body can be fought on all levels and violence is in our nature. There is no god there is no devil there is an All Encompassing force that connects all living things. Embrace the ritual and the veil will come crashing down..."

An Unending Pathway will be released via Relapse Records on October 28th, 2014.

1. Entropy
2. Collapse
3. Revenant
4. Bereavement
5. Rot
6. Allfather
7. Veil Preorder An Unending Pathway on CD HERE, via iTunes (which includes an instant download of "Collapse") HERE or via BandCamp HERE.
"...shambling, ritualistic drone that gets its talons into you via crusty howls, a colossal dynamic, and the overall feel of continuing ritual" - Pitchfork