- October 30, 2014
tētēma is a new project from Mike Patton and composer Anthony Pateras. Ipecac Recordings will be issuing the duo's new album, Geocidal, which will be out December 9th and a sample of what the album will offer has been revealed.  "Tenz" has the feel of ritualized dance and trance modes revealing shades of On The Corner era Miles Davis and even some rhythmic patterns that sound akin to Cibo Matto's Viva! La Woman (I'm thinking of its opening track, "Apple").  Pushing the trance comparison a bit, the track also contains what could be considered "drop" sections, few second length pauses followed by heavy blankets of sound, not to mention Patton's heightened vocal.

Check out the track and read some info on Geocidal, all of which has been provided by Speakeasy PR. 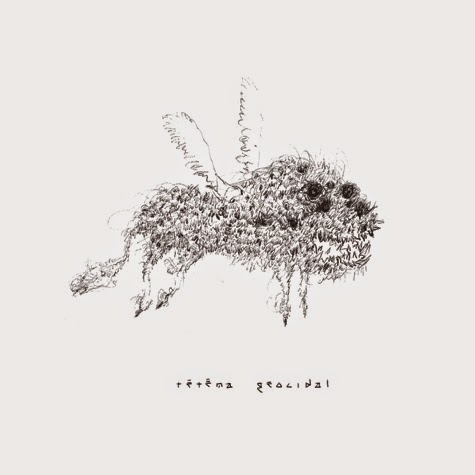 "This track experiments with a palimpsest of rhythmic microcosms, consisting of drums, voice, arp 2600, contrabass recorder, nylon string guitar and marimba," explained Pateras. "The orchestration attempts to create kaleidoscopic barber pole effect : a constantly rotating electro-acoustic cross-pollination which culminated in some kind of brutal polychronic trance music, albeit with a glockenspiel coda."

The Quietus said of the song: "Judging from 'Tenz'...the album promises to be an intriguing affair. It opens with the lumbering rhythmical heft that immediately brings to mind Cut Hands, before Patton's incantatory vocals surface and we skirt through jazzy touches and gentle inflections of contrabass recorder and synth, culminating in a full-on, howled assault."

Geocidal is very much Pateras' vision realized over one and a half years of recording. The record combines various musical elements from analogue electronics, strings, winds, brass, orchestral percussion, and vocals - each recorded in a different location which as Pateras describes, creates a "displaced, almost vaporous intensity - it comes from everywhere and nowhere." Every one of these musical elements on Geocidal was also played live, with no samples, handcrafted and performed by a human - stemming from a desire to base everything on feel and instinct. Ultimately then, it represents universality and timelessness in music.

Combining this method of live recording, and the cross-pollination of an array of musical talent, Pateras allows for absolute stylistic freedom which makes Geocidal a very dynamic and unclassifiable album, where quality is never compromised over the quantity of ideas on display. As Tiny Mix Tapes said of Pateras’ music, it offers a look as to where “trailblazers of avant-garde are heading,” adding music lovers will “be captivated by his bold creative foray.”