- November 18, 2014
There's a lovely tension to this instrumental from Bee vs. Moth called "Machine Room Reverie," itself the marriage of bowed instrumentation and bass licks that make me think of a suburban grade 23 Skidoo.  The song has a somber (and maybe even indifferent) bent, which is found mostly in its string melody, as it casually strolls through surroundings not completely bereft of grace.  To my ear, the music wants to either cite some beauty in monotony, or poetry in routine, that key melody addressing fleeting periods of warmth while the rhythm remains content to walk in place.

Check out the video here:

Bee vs. Moth released their album Shelter in Place back in September. (And, yes, it's probably another winner that I missed this year).  You can check out the album via the Soundcloud link below.

All info the release was provided by Us/Them Group. 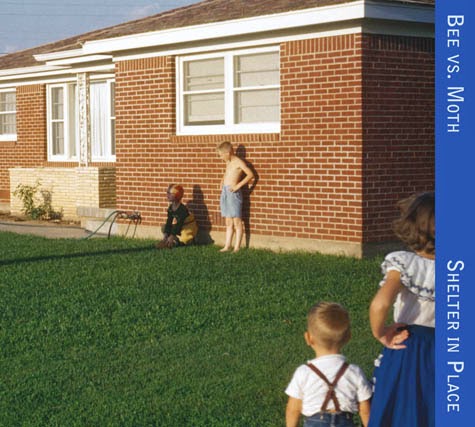 "I fall in love with maybe two, maybe three jazz records a year. But every once in a while something comes along and perks me up. I hear the sounds of Ornette Coleman and the band Television. And sometimes in the same song." - Bob Boilen, NPR

Austin jazz-punk group Bee vs. Moth share another video from their new album today via Brooklyn Vegan. The clip for "Machine Room Reverie" is available to watch/share HERE. Bee vs. Moth have lined up a variety of Austin shows for the winter. Please see current dates below.

The band recently premiered the first video from the album via Austin Chronicle. The clip for "It Looked Good In The Showroom" is available to watch and share HERE. The band's entire new album is streaming in full (all tracks cleared for posting) HERE.

Bassist Philip Moody and drummer Sarah Norris started Bee vs. Moth together, and began performing in 2004. The band has since grown into a diverse, rotating cast with ambitious arrangements featured in film and television scores, original videos, and live shows in Austin and throughout the country.
Shelter in Place delivers the power and wit Bee vs. Moth fans expect from a band that likes its jazz served with a New Wave punch. But for this record, their third studio release, the band adds a kaleidoscope of new sounds with strings, saxes, brass, organ, and found percussion front and center. Working in a garage studio for several months with friends from varied corners of Austin's music scene, the band expanded its creative process to produce a focused and intensely creative result.

Shelter in Place is released September 9th, 2014 on CD and download. The record follows the band's 2007 debut, Soundhorn, and 2010's acclaimed Acronyms.

Bee vs. Moth also continues to produce unique film and recording projects. The 2012 SXSW Film Festival commissioned the band to debut a new silent film score for Ernst Lubitsch's The Oyster Princess (1919). This followed Bee vs. Moth's acclaimed score to Buster Keaton's The Cameraman. The band's songs made their second appearance in a season of PBS' Roadtrip Nation. Currently, Bee vs. Moth is collaborating with Austin band The Invincible Czars to re-imagine the symphonic masterpiece Pictures at an Exhibition for an 11-piece double rock band, complete with horns, strings, guitars, drums, and percussion