- December 10, 2014
2015 is weeks away and with that obviously come January releases.  First point of interest so far is this track from Disappears called "Halcyon Days," a minimalist, repetitious and spacy mutation.  In the simplest of comparisons, one could consider it a Bauhaus'ian attempt at something Neu! might've composed, a very cyclical, cold and immersive derivation.  Kranky will release Disappears' new album, Irreal, on January 19th.  The album was produced by John Congleton at Steve Albini's Electrical Audio in Chicago.

You can hear the track here:

All info was brought to you courtesy of Rarely Unable.  "Halcyon Days" had premiered at The Quietus on December 5th and their assessment of the track is a much more eloquent interpretation than mine.  You can also sample "Another Thought," which is another single from Irreal that surfaced a few weeks ago. 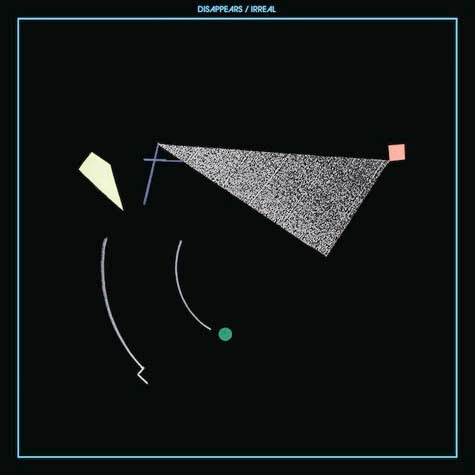 Ahead of Irreal's January 19th release on Kranky, the Quietus have premiered 'Halcyon Days', which samples Disappears in their most potent form. Here's their take on the track...

"Processed, reedy pulses echo briefly before being cut dead in the left channel, stubby chugs itch away in the right, the whole coaxing out an atmosphere of fraught, slightly doomy angst, brought even closer by Brian Case's droning, monotonous vocals. Admittedly things do let up, as more resonant guitar lines spill out, glossing the track with a reverb'ed sheen as the track closes, but it feels like the Chicago outfit's most icily focussed offering yet."

About the album...Irreal, the fifth long player from Chicago's Disappears, is another trip down the rabbit hole.

The album plays out as a dream sequence - hazed dub landscapes give way to the groupʼs most experimental and open music yet. If their last album Era confirmed the fact that Disappears are on their own trip, then Irreal is where it kicks in.

Eternalism, roboethics, identity - the album is a Ballardian mix of imperfect melodies, half thoughts and good ol' dystopian modernity. It is a masterclass in texture, pace and control. Produced by John Congleton at famed Chicago recording institution Electrical Audio, Irreal sits in the negative space where art rock and post punk collapse onto each other. Irreal is the sound of Disappears reporting back from The Void.

Stream 'Another Thought' via Soundcloud