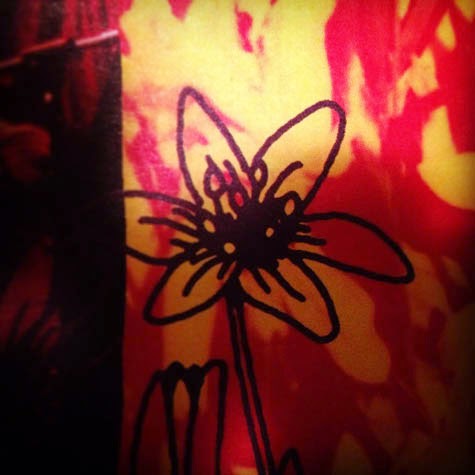 Following the still relatively decent (though dated) Bricks Are Heavy, L7 released Hungry For Stink, an album I remember listening to quite a bit after I picked up a copy.  At some point, though, maybe after a month of consistent listening, I put it down and it's only gathered dust since.  I blame "Andres," mock-worthy lyricism ("Down in North Hollywood/There's a guy with... long hair...") coupled with grunge-as-cliché distorto-chugging, and the super-cheesy "Shirley," which was a very lazy tribute to drag racer, Shirley Muldowney.  To the album's credit, "Freak Magnet" and "She Has Eyes" continue to stand out as worth mentioning.  The rest of the album, however, has faded from memory.

I'm filing together NOFX's Punk In Drublic, Bad Religion's Stranger Than Fiction and Rancid's Let's Go as these three releases (along with 1993's Unknown Road by Pennywise) represent the Epitaph-related missteps I would continue to take for many years before I figured a few things out, namely that pop punk isn't for me.

Starting off with Punk In Drublic, there are a few things about NOFX's fifth record I consider worth noting.  It's hard to top the anthemic "The Brews," a great hook enticing a multitude of fists to pump in unison with every choral "Oi! Oi!," and the near-metallic combo of "The Quass" and "Dying Degree" remain two of the albums more hardcore-bred tracks, at least in that they capture the genre's late 80s crossover into thrash a la D.R.I.  The rest of the album, however, has lost much of its appeal for me, played out to the point of complete disdain.  The forced provocation attempted with "Don't Call Me White" has grown tired and corny and the name-checking in "Punk Guy ('Cause He Does Punk Things)" wants to seem more clever than it is.  "Leave It Alone" isn't bad, I guess.

A few years ago, I attempted to revisit the album.  The following weekend, Punk In Drublic was in a stack of CDs I was exchanging for store credit at A.K.A. Music.


Stranger Than Fiction was the first Bad Religion release that I'd acquired and the band's first foray into major label status having left Epitaph for the time being.  I adored Bad Religion.  After listening to Stranger Than Fiction, I went on a hunt for just about every BR release I could find, fascinated with them lyrically (more than musically, though I dug what I heard) and latching onto albums like Suffer, No Control, Against The Grain and Recipe For Hate, which was later re-released by Atlantic following the group's transition.  As I delved more into the band's back catalogue, though, Stranger Than Fiction became less appealing, a sterilizing glaze adhered to it designed for mass consumption that had become difficult to ignore.  Even later records like The Gray Race and No Substance had more in common with their older albums.  Even so, I enjoyed the key melodies found in "Individual" and "Hooray For Me..." and I even dug the slowed-up rock churn devised for "Infected."  The decision to re-record "21st Century (Digital Boy)" proved to be profitable for the band, though the original is still better.

Currently, the 80-85 compilation is the only Bad Religion album I go out of my way to listen to.


For me, Rancid's Let's Go was a boring album, though I enjoyed the band's self-titled debut and their highly successful follow up ...And Out Come the Wolves.  I saw Rancid play live more times than I'm willing to admit though, to the band's credit, they were a lot of fun live.  The band's attempts at emulating The Clash sound much more obvious now than twenty years ago and that's impacted my opinion of the group significantly.  Well, that and I've simply outgrown them.  The only song Let's Go had to offer that ever left any impression was its first track, "Nihilism," which sort of confirms how long the album held my interest.

Era-specific to say the least, the soundtrack for the Brandon Lee film, The Crow, was a major release in 1994.  I'd go so far as to say the soundtrack was more successful than the movie.  Aside from the hoopla that surrounded the movie following Lee's untimely passing during its filming, the compilation featured many of the decade's biggest acts.  "Big Empty" by Stone Temple Pilots was one of the compilation's most significant offerings, the song emanating from every car radio and television within earshot it seemed back then.  Also original to this soundtrack is The Cure's "Burn," another hit that was penned specifically for the movie.

Nine Inch Nails produced a worthy take on Joy Division's "Dead Souls" and Rollins Band's slowed-up, blues metal rendition of Suicide's "Ghostrider" remains powerful.  Pantera contributed a cover of Poison Idea's "The Badge."  The album also has one of the few Rage Against The Machine tracks I still enjoy, a retitled and re-recorded version of their B-side, "Darkness," Tom Morello brandishes some decent chops as a jazz guitarist prior to his complete surrender into trend-informed sonic gimmickry.

On the strength of the album's single, "Seven," I picked up Sunny Day Real Estate's Diary.  While I enjoyed the album as a whole, Diary had no real staying power for me.  I know that's sacrilege to some as Diary remains a milestone release, representative of the so-called second wave of "emo" which was also enforced and fortified by bands like At the Drive-In.  I think Diary is something I should revisit as I believe it would probably resonate more now.  Still, great album.

A few months after Kurt Cobain's suicide, MTV Unplugged in New York was released and consequently became Nirvana's unintended final act.  While the events that preceded the album's release likely add emotional weight to its performances, MTV Unplugged in New York is a great listen, comfortable banter between band members peppered through acoustic renditions of some of Nirvana's greatest songs.  I still love the Unplugged version of "About A Girl" in spite of it being the album's only real single and thusly in constant FM rotation.  Also great are "Come As You Are" and "On A Plain," the latter being a Nirvana favorite of mine that I feel gets unfairly overlooked.  Cobain does a great job with David Bowie's "The Man Who Sold The World," and the guest appearance of the Meat Puppets, who help Cobain out with their own songs "Oh Me" and "Plateau," is one of the album's best moments.

By the time Cobain sings Lead Belly's "Where Did You Sleep Last Night?," there's an overwhelming air of finality that I certainly felt when I'd heard this album so many years ago.  In Nirvana, the 90s had experienced its own Woodstock and Altamont in the span of about three years and the band's lasting effects have carried on well into the millennium.  From that standpoint, even though their presence was short lived, I see new generations of children in the midst of their own respective eras of discovery donning Nirvana t-shirts and confirming the band's continued place in the annals of rock history.  MTV Unplugged in New York is a perfect farewell.


Sincerely,
Letters From A Tapehead
90s over the hill