"Blessed" is the first glimpse into the band's upcoming new release, Success.  Engineered by the one and only Steve Albini, (and if you check out the track you can certainly hear Albini's signature drum sound), the album is due to release mid-June and the shock and grunt of the lead single certainly goes the distance in terms of selling its promises of alienating and unbridled pigfuck-allegiant rock music.  While I wouldn't go so far as to say the torch has been passed from David Yow's maniacal grasp, the muck and angst-fueled motion of KEN mode is worthy enough to at least sit alongside some of the finest albums to emerge Touch & Go and AmRep.  I'm very much looking forward to giving Success a spin or twelve.

"We can play this game a little bit longer/But we all know we're not really welcome here...  Oh no... "

You can also view an album trailer here:

All info, links and sounds have been brought to you by Rarely Unable. 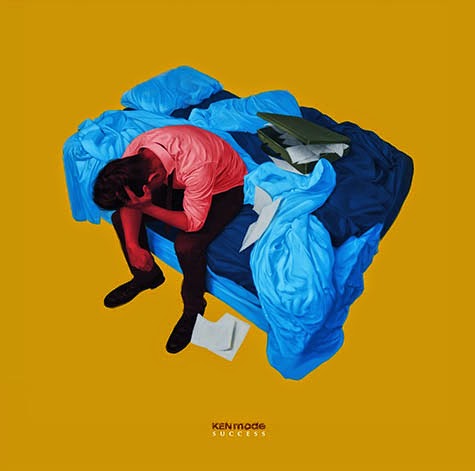 The latest turn from KEN mode will take many by surprise. The Winnipeg trio can announce that their next album is titled Success, and is a bold move towards sounds that inspired them at their beginning sixteen years ago, and now doubly so on their sixth full-length, which will see release on June 15th (Season Of Mist).

Recorded with legendary engineer Steve Albini (Nirvana, the Jesus Lizard, PJ Harvey and so many more) to capture the material in a fully live and analog session in the band's hometown in November 2014, brought to fruition is the most raw, rock and roll sound the band has ever put forth.

We are pleased to share the video for album opener "Blessed", which premiered worldwide on the Noisey network including Germany, France and the UK. The song features no guitar, only bass, and that's not all it features either, this Christopher Mills (Tegan & Sara, Rush, Metric, Modest Mouse, etc) directed video boasts appearances from guest vocalist Eugene Robinson (Oxbow), guest cello by Natanielle Felicitas, and guest noise by Dylan Walker (Full of Hell).

Rock, noise, math, indie – KEN mode offer a root to it all on Success, locating a common ancestor that's behind all that they do and have done as a band. It's one seriously fermented sound that pervades these recordings, a goldrush of skewed rhythms, corrosive riffs and scorching pickup abuse, so diligently pulled off and inherently important to the band. Their path first appears to be one of complex inspiration, but a lineage soon becomes clear, lighting up a way through concentric circles of legacy that encompasses Revelation Records, Dischord, Touch And Go, Sub Pop – the full spread of inventive heavinesses that fed in to the grunge estuary, and out in to the open sea of independent labels in the final decade of the last century, where KEN mode first appeared.

Success is a funny concept; in its rawest, most pure form, it is entirely relative, and this was the subject KEN mode chose to approach their new album with. Sonically, and lyrically, a shift has been made from the classic spitting of metallic hardcore tinged vitriol, that the band has become known for, to a rawer, more mature, even humourous indie rock aesthetic. In April 2014, the band set out to pay tribute to where they've come from: a salute to both their Canadian Prairie roots, and a time when they first started to care about making music; the burgeoning 'grunge' and Touch & Go/Dischord scenes of the late 80s/early 90s, with bands like Nirvana, Big Black, Cop Shoot Cop, The Cows, Circus Lupus, and Drive Like Jehu warping their teenage minds. Lyrically, the band's fascination with comedy spirals around classical western concepts of 'success' - from employment, sex, marriage, religion, socioeconomic standing, and particularly the many perceptions people have of how they, and those around them, happen to fit into the world.

Artwork from acclaimed Winnipeg based fine artist Randy Ortiz can be viewed below, along with the track listing for the album.

The current lineup of Jesse Matthewson (vocals, guitar), Shane Matthewson (drums) and Skot Hamilton (bass, vocals) will be touring Europe from April 1st, delivering Success as it was recorded - live, primal, and in your face. It's recommended that you experience it in the flesh, and as such, the band will be organising special release show album pricing on many of their dates surrounding the release date.