- April 08, 2015
Pallbearer put out a video for "Watcher in the Dark," one of the six pieces of solid, odyssey-driven gargantua that comprises the band's 2014 release, Foundations of Burden.  While there's not much to say about the video since it pretty much only checks off boxes, (features band *check*, provides competent visual accompaniment to single *check*, seems to follow the band's aesthetic or mood *check*), the track itself addresses the band's want of expanse and intensity, summarizing riff-lust as a means of aural pulverization and melody as counter to complete ruin and subsequent transit to any note of beauty.

All info, links, tour dates and video were supplied by the wonderful Rarely Unable.

PALLBEARER PREMIERES FIRST MUSIC VIDEO EVER FOR "WATCHER IN THE DARK"; TRACK APPEARS ON FOUNDATIONS OF BURDEN; ON TOUR THIS MAY, JUNE AND JULY 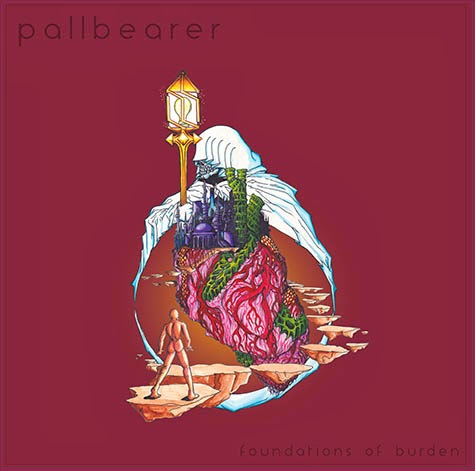 Watch Pallbearer's epic and cinematic new video for "Watcher in the Dark"
https://youtu.be/rJKOrCAkt1A

Pallbearer is currently on tour in North America on the Decibel Magazine Tour alongside At The Gates, Converge and Vallenfyre. Following the tour's completion next week, Pallbearer will canvas the greater part of Europe and the UK before venturing to Australia and Japan, then will head back to Europe for festival plays at Roskilde (Denmark), Radar (Italy), Stoned from the Underground (Germany), and more, with U.S. festivals like Bonnaroo (Tennessee) and Free Press Summer Fest (Houston) in their itinerary as well. Check out the band’s rigorous Spring/Summer European touring schedule below.

Formed in 2008 by Joseph D. Rowland (bass) and Brett Campbell (vocals/guitars), Pallbearer grew from the fertile underground metal scene of Little Rock, AR. A year after their formation, the band released their first three-song demo (with guitarist Devin Holt), which garnered well-deserved attention. Pallbearer went on to release Sorrow & Extinction in early 2012 on well-respected Canadian indie label Profound Lore, and instantly made waves among listeners and critics who found the band’s compositional paradox of vulnerability and might unparalleled in the metal world. Sorrow & Extinction proved to be an unequivocal masterpiece in any genre of music and compelled Pallbearer to reach even further creatively for what would come next. In August of 2014, the band released the monumental and acclaimed, Foundations Of Burden; an album that delves even deeper into Pallbearer’s melodic contexts, adding a new and compelling dimension to music which has long since proven itself to be inexorably captivating.