- April 09, 2015
Erratic jazz-nihilists ZU have put out a new video from their recently released Cortar Todo LP, "Conflict Acceleration."  An unsettling buzz finds some rhythmic stride and eventually transitions into a corrupted seesaw of rampant drum sounds and scraping brass honks, an almost hardcore length fury that fades out about as quickly and abruptly as it begins.

All info, links, tour dates and video were provided courtesy of Rarely Unable. 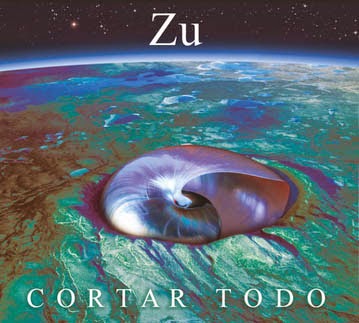 Following the recent release of their brand new full length, Cortar Todo, ZU have shared a music video for the album track "Conflict Acceleration" directed by Sara D'Uva. The band have also announced the first round of European tour dates, which you can also see below.

Keep up to date with all things ZU on their brand new website: www.zuism.net
Catch up with all label news via the Ipecac website: www.ipecac.com

"Without sacrificing any of the solidity, astringency or brutality akin to their previous blood-lettings, Zu spit out their most astral of recordings... Brain-draining and muscle-cramping, the voluptuousness of these recordings presents itself as a worthy anthem of the disinterested reality of our age." - THE QUIETUS

"Cortar Todo is yet another outstanding release from one of the most original musical acts today." - THE LINE OF BEST FIT