- May 08, 2015
Dana Schechter, the sole presence behind the dark mechanics of Insect Ark, is releasing her first full-length LP, Portal/Well.  From the new album we get "The Collector," blasts of percussive battery and thudding low end that address a metronomic beep, answering its persistence.  The swelling song of a lap steel surfaces as the construct takes a more tangible shape, an undulating drone that attempts to soften the jagged mash of snare, cymbal and bass beneath it.

In early 2014, I reviewed Insect Ark's Long Arms EP, naming it one of the best releases of 2013.  You can find that review here.

"The Collector" and all info concerning Portal/Well were provided by Howlin' Wuelf Media. 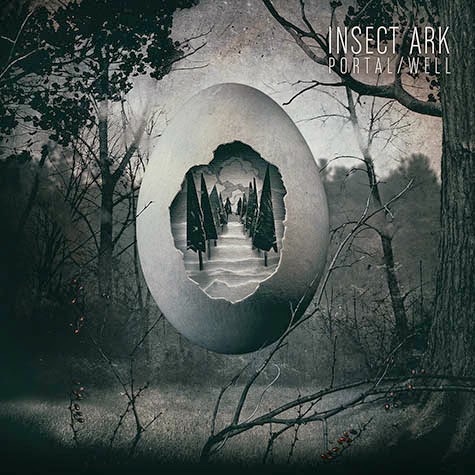 Portal/Well finds its voice in the sound of elements burning and crushing into each other: in the haunting groans and swells of the lap steel guitar, the stalking bass, the insistent drum programming, and the deep oscillations of synthesizers. From this morass songs are born, deeply melodic, dense, austere, and wildly unhinged. Creating a personal soundtrack to the underbelly of the human psyche, Insect Ark weaves a brooding, textural landscape--a starless night spiked with light and flash. The music braids together delay-drenched lap steel, programmed and real drums, distorted bass, and synths to create a sonic mural both uncomfortably intimate and icy cold. To say that Portal/Well is a dark album would be a grave understatement - Insect Ark is often called "Experimental/Doom" - but there are moments infused with bright shards of light and respite to breathe clear air, before submerging the listener once again into a deep cavern of lustrous shadow.

Over the course of a year, Schechter wrote and recorded all these tracks alone, at all hours of the day and night. The album was built with careful attention to immaculate detail, but also takes chances, pushing beyond personal barriers. Without the external influence of collaborators, it is the product of a journey into composition and sonic exploration using a small but dynamic palette of instruments and a singular compositional voice.

Insect Ark began in late 2011, as the one-woman solo project of bassist and multi-instrumentalist Schechter. As an analog-electronic hybrid with a heavy focus on live performance, Insect Ark has been building a following in the experimental doom scene via consistent touring in the U.S. and abroad.

Dana Schechter, a California native, spent her teens in the San Francisco metal scene, where her love of heavy music gained its foothold. She moved to NYC in 1997; in 1999 she began working as a recording and touring bassist with Swans leader Michael Gira's Angels of Light and she founded her own band, Bee and Flower, as well. In 2004 Bee and Flower relocated to Berlin, its new base for touring and recording.

By 2008 Schechter had finally found her way back to NYC. There, she formed Insect Ark as an effort to write and tour continuously without the complexities of a band and to reconnect with the darker, heavier, and more abstract sounds of her youth.

In 2015 Insect Ark gained a second member, drummer and electronics operator Ashley Spungin, who is known for her work with the Portland-based band Taurus. While Schechter appreciated the freedom of working alone, she ultimately decided that live drums would be a powerful addition to the project's releases and shows. The new duo incarnation of Insect Ark will begin recording and touring in spring 2015.
www.insectark.com