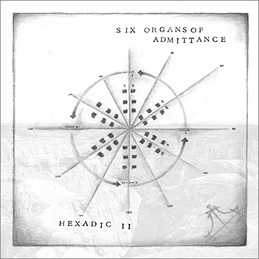 Earlier this year, Ben Chasny (a.k.a. Six Organs of Admittance) issued the Hexadic LP, which was a creative showcase meant to demonstrate a new systemic means of songwriting that Chasny had developed.  I wasn't completely on board with Hexadic, (you can read my review here), so the announcement that there would be a sequel to the album, predictably titled Hexadic II, wasn't met with a ton of elation.  However, listening to "Exultation Wave," the album's first single, I'm wondering if Chasny is applying the same songwriting methodology since this track seems much more thought out and less erratic.

Check out the track below.

Hexadic II will be released by Drag City on November 20th.

Sounding forth from a resonating body, the music of Six Organs of Admittance seems to reach us from an ancient remove. Ben Chasny's 6OOA vehicle is a wide-ranging craft, spanning over a dozen albums whose gaze is always shifting, but whose focus never wavers. With Hexadic II, Ben Chasny's unique touch on acoustic guitar is brought back to our ears after what feels like a kind of forever. What may identify to some ears as folk music is caught in an equally compelling undertow of powerful subterranean energy.

Hexadic II is ultimately what the listener hears it to be - a darkly spiritual listen, filtered through their ears and their perceptions and choices. As ever, Chasny has a head-full of ideas that are driving him; Hexadic II simultaneously explores the same charts and paths that gave birth to its predecessor, while creating music of a totally different order. The Hexadic II songs have direct correlation to the Hexadic songs, yet are much more than mere acoustic versions. "Exultation Wave", for example, simmers with an undercurrent of ethereal transcendence, the strings bending under the virtue of Ben's voice. Think of them as distant cousins to the songs on Hexadic, obsessed with greek choir, the desert, and the sea.

Simultaneously more inviting and challenging than Hexadic, Hexadic II is a powerful musical journey into the enigma of interpretation and inspiration; begin the journey on November 20th.

You can purchase the Hexadic bundle (including cards, instruction book and the first record) via Drag City, and place orders for Hexadic II.