So, the Amphetamine Records documentary, The Color of Noise, will be released on November 24th.  It's currently available for pre-order.  I've been aching to see this documentary since the trailer first became available, so I am very excited to give it a look. 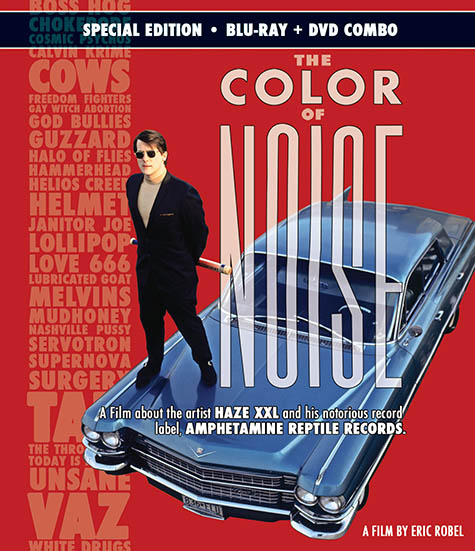 Also exciting, though, is the onslaught of AmRep reissues planned, the first wave including a 3-LP set of the Dope-Guns-N-Fucking in the Streets compilation, Cunning Stunts by Cows, Music for Insect Minds by Halo of Flies and a soundtrack release for The Color of Noise, which will be issued on colored vinyl for RSD-Black Friday.

All links and info was provided by MVD Entertainment Group.

MVD Entertainment Group and the legendary Amphetamine Reptile Records have partnered with Robel Films to release the documentary The Color of Noise, a film that looks into the history of the label and its founder Tom "Haze" Hazelmyer. MVD and AmRep will also re-issue some of the best releases from the catalog on vinyl and CD starting in Dec 2015 and continuing into 2016 and beyond.

The initial round of releases includes the first vinyl edition of the legendary Halo of Flies' Music for Insect Minds on double LP, the Cows' classic Cunning Stunts and a 3 LP set of the infamous Dope Guns 'n Fucking in the Streets compilations featuring Mudhoney, Helmet, Melvins, Tad, Tar, Superchunk and lots more. Also, the soundtrack to the The Color of Noise will be released on limited edition 150 gram color vinyl for Record Store Day on November 27th.

The Color of Noise is a full length documentary about the Artist Haze XXL (Tom Hazelmyer) and his notorious record label, Amphetamine Reptile Records. Throughout the 80's and 90's the label would achieve almost cult-like status for being adventurous and daring in the midst of a time where "safe" punk rock would rule the airwaves with a newly accepted style of music by the mainstream college goers, Grunge. Though with AmRep, not only a roster of the most outrageous performers would find a home, but also a legion of poster artists who broke all of the rules.

Armed with a computer and an aesthetic of bold imagery, an artist would emerge in Hazelmyer. This is an American mid-west story about a man who created his own path, far from the norm and how he brought along with him countless others who would achieve greatness by sheer proximity and participation. This is the true American underground.

Featuring over 50 interviews from across the globe, unearthed live footage of the bands and stunning visuals masterfully edited together resulting in one of the years' best music documentaries. Premiered at Jack White's Third Man Records and taken on a US tour shortly afterwards, The Color of Noise has gained the reputation as one of the most important films about the Noise Rock era.