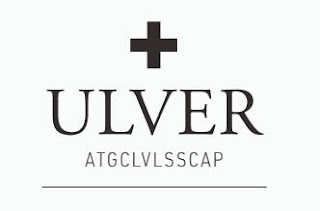 The new album coming in early 2016 from Ulver is in fact titled, ATGCLVLSSCAP, which is apparently an acronym for every sign of the zodiac.  Without having heard a single note of this release, the points of influence noted in the information below, which was provided by Rarely Unable PR, feature Kraftwerk, Neu!, Amon Duul II, John Carpenter and Bernard Herrmann.  It sounds like it's going to be ominous, propulsive and generally unsettling.

I unfortunately have no tracks to share at this point, but I'll be sure to post any that surface over the next few months.  ATGCLVLSSCAP is to be released via House of Mythology on January 22nd, 2016.  As mentioned, all info was provided by Rarely Unable.

House of Mythology proudly presents the new Ulver gatefold double album vinyl (also available on CD), with over 80 minutes worth of material. This album consists of multitracked and studio-enhanced live, mostly improvisational, rock and electronic soundscapes, 2/3 of which has never been heard before.

In Newton’s basic laws of motion – those which lie at the heart of modern physics – the paradox stands that constant velocity is essentially as natural as being at rest. True to form, in the now twenty-two-year-old life of Ulver, only one constant has remained, that being a forward-driving spirit that has moved this mercurial Norwegian-based collective forever through challenges and adventure anew, irrespective of reductive genre pigeonholing. Moreover, their latest voyage into the unknown is no different, marking another new chapter for an outfit characterised by wild and inspiring unpredictability, along with a fresh triumph for one of modern music’s most iconoclastic forces.

The basis for ATGCLVLSSCAP – which the band has been working with under the moniker ‘12’ – arrives from recordings made at twelve different live shows that Ulver performed in February 2014, in which band the band vaulted into the deep end of an improvisatory approach to their performance. As Kristoffer Rygg, the prime mover of the band since its inception puts it wryly, “The tour was to be an experiment, kind of loose and scary for a band as ‘set in their ways’ as us.”

Although the line-up for these shows remained similar to that on 2012’s psychedelic covers album Childhood’s End, and the band had taken succour from the sounds and headspace they explored on that record, this was another break into new territory, using their live energy and spontaneity as the fuel for aural explorations that would surprise even the band themselves. “At the end of any album process, I can’t wait to do something else,” comments Rygg. ”So yeah, it is partly borne out of that feeling, being a bit bored with the circumstances. It was quite liberating to do something more in the moment. One night a jam could be five minutes, and the next it could be fifteen. We couldn’t have captured these songs in a studio environment.”

Once the tour was over, it was down to his bandmate Daniel O’Sullivan to take charge of these multitrack recordings, sculpting and editing hours of material in his North London enclave, formerly owned by charismatic artist and Coil associate, the sadly departed Ian Johnstone – as O’Sullivan noted, “The hungry ghosts of the now empty house appear to be burrowing into this record.” Anders Møller, Kristoffer Rygg and Tore Ylwizaker got involved a bit later, honing things from their end in Subsonic Society and Oak Hill Studios, Oslo, before the vinyl cutting process took place at THD Vinyl Mastering, also in Oslo, in which the band was fully involved in the crucial initial cut of the 14” lacquer. What resulted is the widescreen sweep and atmospheric splendour of ATGCLVLSSCAP, ultimately a piece of work that exists above and beyond any conventional live recording, rather a hallucinatory travelogue as potent an experience to bear witness to as it was to construct.

As always in the world of Ulver, influences are disparate and diverse, yet as Rygg notes, “It’s quite tributary in a way, there are clear nods to sounds from the past.” Many of these dwell in progressive, electronic and krautrock realms, heralding a lifelong love within the band for the music of the 70s – the fiery mantras of ‘Om Hanumate Namah’ and the motorik drive of ‘Cromagnosis’ draw an astral trajectory between the propulsion of Kraftwerk/Neu! and the ritualistic intensity of prime Amon Düül II, whilst the spirits of both Klaus Schulze and John Carpenter are audible in the electronic soundscapes of ‘Desert/Dawn’, not to mention the Bernard Herrmann touch in the closing ‘Solaris’. Even when the band revisits an earlier gem from 2000’s Perdition City album, as on ‘Nowhere (Sweet Sixteen)’, its reinvigorated by their expansive and emotionally charged approach.

“We always feel like, independently of what kind of instrumentation we use, we’re still playing the same nocturnal stuff,” laughs Rygg. “There are a few motifs that keep recurring all the time in what we do, and if it’s in a rock form or an electronic form, it’s always there.” Yet as true as this may be, by shaking up their creative process, the band have summoned up a unique testimony to the creative power of a mighty force who remain blissfully free of genre or convention, ATGCLVLSSCAP is progressive in the truest sense of the word, a record that may be this capricious band’s pièce-de-resistance. (words by Jimmy Martin)