Three Men and a Baby is the combined work of the Melvins and godheadSilo's Mike Kunka, billed as Mike and the Melvins.  It was supposed to be released in 1999 and it looks as though this album will finally see the light of day on April 1st, (April Fool's Day coincidentally).  Info regarding the release was provided by Sub Pop. 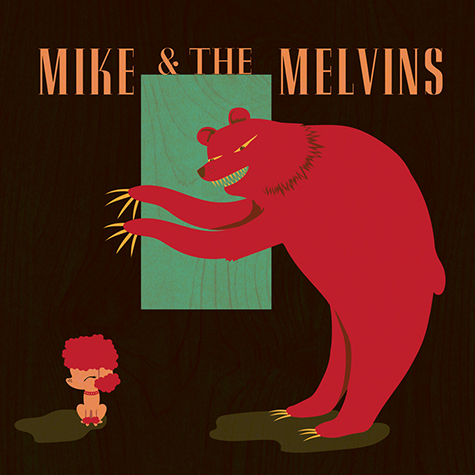 You can also check out the single, "Chicken 'n' Dump."  The track premiered at Noisey.

On April 1st, 2016, Sub Pop will release Three Men and a Baby, the long-awaited collaboration between Mike Kunka (godheadSilo, Enemymine) and the Melvins. The 12-song album features the highlights “Chicken ‘n’ Dump” and “Limited Teeth.” Most of Three Men and a Baby was recorded in 1999 at Louder Studios by Tim Green (The Fucking Champs), and it was finished in 2015 at Sound of Sirens by Toshi Kasai.

Noisey had this to say of "Chicken 'n' Dump": "Delivers on the promise of the Kunka/Melvins pairing, fixing Mike's hellacious, chugging low end to Buzz Osborne and the boys' thick racket, banging out a riff as joyous and as it is punishing(see premiere January 26th)."

Three Men and a Baby is now available for preorder through the Sub Pop Mega Mart, Google Play, iTunes, Amazon, and Bandcamp. LP preorders through megamart.subpop.com will receive the Loser edition, housed in a custom dust sleeve and on white vinyl (while supplies last). There will also be a T-shirt available with all album bundles.

About Mike and The Melvins:
Three Men and a Baby is the new album by Mike and the Melvins. It was supposed to come out sixteen years ago.

These are the facts we can be sure of: in 1998, around the time his band godheadSilo went on hiatus, bassist/vocalist Mike Kunka busied himself by tagging along on a tour with his friends the Melvins. Somewhere along the way, Mike and the Melvins – King Buzzo (guitar/bass/vocals), Dale Crover (drums/vocals), and Kevin Rutmanis (bass/vocals), at the time – decided to make a record together, and gave the project the imaginative moniker Mike and the Melvins. Sub Pop, ever on the hunt for music’s Next Big Thing, enthusiastically agreed to fund and release the super-group’s debut, and recording commenced sometime in 1999.

It’s at this point that things get hazy. Apparently, one or more of the following happened:
Whatever the reasons, the incomplete recording languished on a shelf from 1999 until 2015, when, much to everyone’s surprise, the involved parties reconvened, finished the damn thing, and delivered it post-haste to Sub Pop International Headquarters, where it was promptly scheduled for the coveted April 1st, 2016 release date. What a story, right?

So, about the record: It’s real good! Mike’s signature bass crunch and vocals are all over it, and the Melvins are in fine form. It has everything from hefty noise-rock churn to a Public Image Ltd. song to cough-syrup blues to deconstructed black metal. Neither Melvins nor godheadSilo fans will be disappointed, nor will detractors of either; to paraphrase Mike, if you don’t like it, it probably wasn’t meant for you (read more at Sub Pop).