- January 21, 2016
Boris may currently be the most versatile rock/metal band, somehow managing to adapt to multiple musical disciplines in order to either cultivate some new territory for themselves to explore or to assume collaborative/backing band roles seamlessly.  Lately, they've been somewhat of a pop kick, but seem to be retreating from this a bit with a new release working with a familiar partner, Merzbow.  The results of this union, Gensho, is an ambitious 4-LP set being released by Relapse Records on March 18th.  Based on the strength of the lead single, a highly distorted and wildly scrambled drone track called "Huge," I'm looking forward to giving this monster a listen. 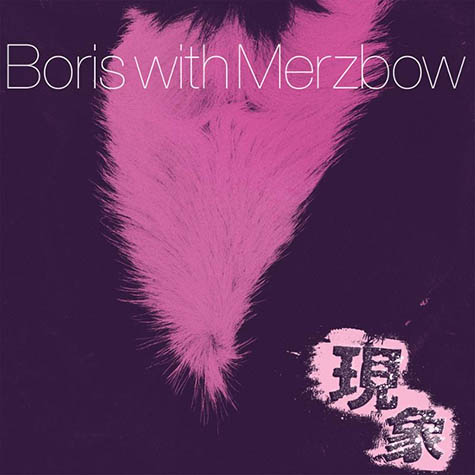 You can sample the track "Huge" below and also check out a trailer for the release.

Renowned Japanese innovators BORIS and MERZBOW have teamed up with Relapse for their new collaborative 2xCD/4xLP Gensho, one of the artists' most daring works to date. Named after the Japanese word for "phenomenon," Gensho is a unique release featuring over one-hundred-and-fifty minutes of new music spread across two CDs and four LPs (available as two separate double LP sets or a deluxe 4xLP edition).

The BORIS songs are percussion-less reinventions of classic tracks from the band's storied catalog, while MERZBOW's tracks are entirely new compositions. The two sets are intended to be played at the same time at varying volumes so that the listener can experience their own "gensho/phenomenon" every time. The artists also commented, "of course you can enjoy both albums as a separate work."
As with every BORIS and MERZBOW collaboration, the only thing to expect is the unexpected, lending the album near-infinite potential for aural discovery and encouraging direct interactivity with the listener rarely found in such unconventional music. An untouchable paroxysm of noisy, droning experimentation! Gensho is due out worldwide this coming March 18th via Relapse Records.

Though BORIS and MERZBOW have an extensive history of collaborating with one another, this latest effort was born out of a one-off show in 2014 for Boiler Room TV, when the two acts decided that their set from that day was worthy enough to perform in the context of a proper studio recording. A complete track listing is included below.

Both BORIS and MERZBOW are well known for numerous collaborative works with a plethora of artists, but have been working together since 1997. They have released three studio albums together (Megatone, Sun Baked Snow Cave and Klatter), two live albums (04092001 and Rock Dream) and one 12" EP (Walrus/Groon). Musically, BORIS helps to shape MERZBOW's wall of noise as a composed musical score with structure, and to make it easier to access the noise master's music while MERZBOW adds an extreme high frequency to BORIS's signature heavier sound.

Masami Akita, better known by his stage name MERZBOW, is a Japanese noise musician. Since 1981, he has released over four-hundred recordings. The name MERZBOW comes from German dada artist Kurt Schwitters' artwork, Merzbau, where Schwitters transformed the interior of his house using found objects. This was chosen to reflect Akita's dada influence and junk art aesthetic. In addition to this, Akita has cited a wide range of musical influences from progressive rock, heavy metal, free jazz, and early electronic music to non-musical influences like Dadaism and surrealism. Since the early 2000s, he has been inspired by animal rights and environmentalism. In 2000, Extreme Records released the fifty-CD box set known as the Merzbox. Akita's work has been the subject of several remix albums and at least one tribute album. This, among other achievements, has helped MERZBOW to be regarded by some as the "most important artist in noise".