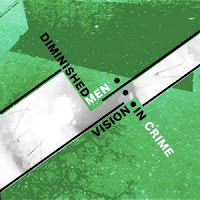 "Zorn-noir" could be a thing. "Kudzu Mine" by Diminished Men, the first single from the group's upcoming new release Vision in Crime, is frantic, immediate, shrill to some extent, and possesses an old style grit that excites the ear and the imagination. It even sounds black-n-white, reverb-soaked strings and percussion envelope a wandering saxophone howl, whose movement seems desperate as if looking for a way out of the track’s initial maelstrom. Then the low end kicks in, the sticks tap the hi-hat, and the surf rock timbre of guitar strings resonates with unexpected density. From there it’s a fun ride.

Diminished Men’s Vision in Crime is being released via Abduction Records (Sun City Girls' label) on March 4th. You can check out the track below. All information was provided by Rarely Unable PR.

FROM UPCOMING ALBUM VISION IN CRIME ON ABDUCTION RECORDS, 4 MARCH

Ahead of the release of their third LP, Vision In Crime, Diminished Men are sharing the track 'Kudzu Mine', highly symptomatic of their sinister avant jazz correlations, and a highlight on an album that takes the listener on a frantic midnight ride on the wrong side of the tracks... 'Kudzu Mine' features saxophonists Skerik (Critters Buggin, Wayne Horvitz, etc.) &; Neil Welch (Bad Luck, King Tears Bat Trip) whipping up an atmosphere of menace and mystery, adding to the freeform movements of the Diminished Men trio and rotating around a circular, reverb-dipped hook.

The opening cut, "Chamber" - an apparition of a forensics crime scene investigation - sets the tone, but this quickly spirals into Steve Schmitt's cobra-twilight guitar work on the Aegean Sea inspired espionage surf track "Oistros Dolorous". From here the band's mutant lounge carnage weaves through sinister cityscapes, plazas and kudzu infested forests on the avant spy jazz of "Kudzu Mine". Elements of lost island noir, hallucinatory Gamelan rock, and phantom radio dispatches can be found here. By the time that mickey sets in, the title track "Vision In Crime", a haunting ballad, closes out the album.

Diminished Men possess dangerous musical minds pulsing with nervous electricity, shattering Fender reverb, and gorgeous, sometimes romantic melancholy. Their distinctive vision is backed up with the quality instrumentation that is crucial to forming the lucid mirages of sound that hover over Vision In Crime.