- February 22, 2016
If you've ever considered the turbulent movements and cycles within a washing machine as comparable to an arranged onslaught of beats, noise, and electronics, this might be for you.  Matmos, who've recently released their LP, Ultimate Care II, (an album built from the sounds of a Whirlpool Ultimate Care II washing machine), just put out a video for the track, "Excerpt Nine." Using the washing machine concept of the album as basis what you'll see if you hit PLAY, this video was borne from a creative partnership between Matmos and the design team, L-inc Design. 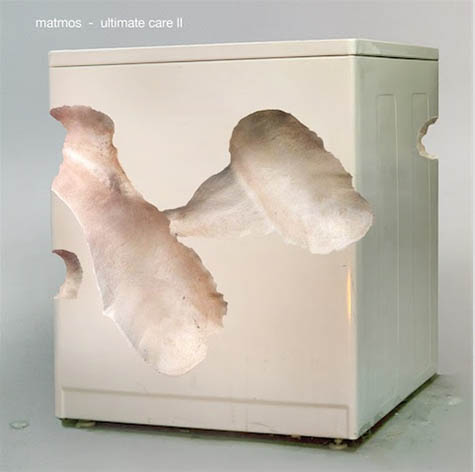 All the info on the video and links came directly from the good people at Thrill Jockey Records.  Support the label.  Support the artists.

"Excerpt Nine" was co-directed by husband and wife team Ed Apodaca and Lisa Berghout. In keeping with the domestic origins of the album, the newest video for the album is a homegrown, family affair. They run L-inc Design, a motion graphics and animation firm, who made Matmos’ acclaimed 2012 video, ‘Very Large Green Triangles’. But for this video they enlisted an extra pair of collaborators… firstly, their teenage son Dario Apodaca, who appears in the opening shot and assisted with animation duties. Secondly, their neighbour Nathan Moody, a colleague and friend who experimented with the placement of Go Pros inside washing machines and provided extreme close up photography of lint and laundry detergent crystals.

The video begins and ends with Dario, loading clothes into and out of a washing machine, which becomes a gateway to an eye-opening turbulent interior world...

Ed describes their creative process for the video: “Lisa was thinking about how to conceptualize a washing machine visually. Her focus was around creating pastoral, aerial and clothing scenes inside front and top loaders that will move and or fall apart with the spinning of the machine, generating a surreal take on washers and their uncanny movement. I mapped textures to cubes with an abstract washing machine front and back to further personify the machines.”

The result is a tightly rhythmic sequence of images that contrast the clean with the dirty, the macro with the micro. In its most intimate setting, we telescope into a hairy grey jungle of lint seen in extreme close up. In its widest view, skyscrapers are made to throb and twist to the clamorous industrial rhythms, while a huge “agitator” from a washing machine seems to rotate entire freeway systems and suburbs. Working together, the Apodaca/Berghout family and their friendly neighbour have fashioned a detailed, delirious and vibrant audio-visual ode to an everyday household chore.

Matmos US in March, full list of dates HERE. There will be a Whirlpool Ultimate Care II washing machine on stage during these performances. A full European tour is planned for June with dates to be announced soon.