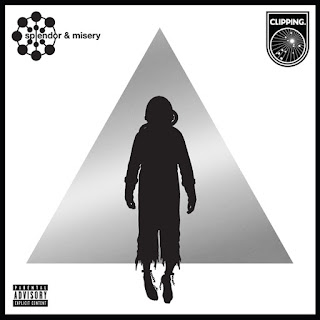 Manipulated blocks of industrially cold friction and cable-similar static provide some very loose notion of rhythm for clipping.'s latest single, "Baby Don't Sleep." This is the first track from the group's upcoming new LP, Splendor & Misery, which is being billed as a "a Sci-Fi/dystopian concept album."  That description seems well-suited for the group's noise fetishism, the often dissonant aural language that sound designers Jonathan Snipes and William Hutson have built around vocalist Daveed Diggs, who has a unique ability to find meter despite the duo's seeming distaste for melody or groove.

Splendor & Misery will be out September 9th via Sub Pop and Deathbomb Arc. You can find info on the release below along with pre-order links, all of which was provided by Sub Pop.

The album is led by the highlights “Baby Don’t Sleep,” “A Better Place,” and “Air ‘Em Out,” was produced by the band, and mixed by Steve Kaplan in Los Angeles. The album announcement comes on the heels of the group’s just released Wriggle EP [link here].

“Baby Don’t Sleep” is Clipping’s collaboration with multi-disciplinary artist Cristopher Cichocki. The new visual is an electrified vortex of video art that jolts into the core of the group’s commanding noise-rap and musique concrete aesthetics. Captured within the industrial bellies of New York and Los Angeles, this meticulously detailed work is comprised from Cichocki’s visual experiments with interference static, oscilloscopic wavelengths, and flicker-frame animation.

There will be more dates announced soon. Please find a current list of dates below.

About Clipping:
Clipping formed in Los Angeles in 2009. Initially conceived as a remix project, Jonathan Snipes and William Hutson began composing new beats to accompany pre-existing rapacapellas. These early attempts paired noise and power-electronics inspired tracks with (stolen) vocals by commercial rap artists. Jonathan and William did this mostly to amuse each other and the duo earned very few fans. However, the band began in earnest in early 2010, when rapper Daveed Diggs joined the group. The three members had known each other for many years—William and Daveed since elementary school, and Jonathan since college. Clipping was their first project as a trio, building on both their long friendship and their many shared obsessions: rap, experimental music, and genre fiction, among others.

Clipping released Midcity on their Bandcamp page in February of 2013 and signed with Sub Pop Records only three months later. The band described their debut as “party music for the club you wish you hadn’t gone to, the car you don’t remember getting in, and the streets you don’t feel safe on…” But they were careful not to fall into the critical position assumed of all “underground” artists, where operating outside of the mainstream is understood as a negative judgement of the mainstream. Clipping wanted to emphasize that their experimentation was not meant to assert that all rap should sound one way or another, or that the band had anything but admiration and adoration for the rap music they were providing an alternative to. They went on to describe their sound in relationship to early Dr. Dre production, calling Midcity an attempt to make “classic west coast rap music out of the tradition where sounding different wasn’t cause for fear.”

Midcity began very much like Jonathan and William’s remixes had—noise-inspired beats with aggressive rapping, all made very quickly—but as the project developed, the trio found that their strength lay in more conceptually rigorous practices. Halfway through the album, complex rules began to shape their processes: the band restricted themselves from using traditional drums sounds, and the lyrics were never written in the first person. The first rule was dismissed shortly after it was established, but the second became one of the main strategies for Clipping’s follow-up album.

In 2014, Clipping released their Sub Pop debut, CLPPNG. The title was a reference to the absence of rap’s most common word—“I”— in the album’s lyrics. The omission played with a common contradiction in rap lyrics: their dual position as assertion of individuality and authenticity, and their condition as shared generic codes that can be infinitely rearranged by each new author. Clipping experiment with rap as art-in-a-closed-field but vacate that art of its presumed subjective center, revealing instead a collage of recurrent rap themes, generated as if by an artificial intelligence. The band viewed this limitation as a constrained writing technique, similar to those used in Georges Perec’s La Disparition and Walter Abish’s Alphabetical Africa, but apparently this was too subtle a concept for some listeners as no professional reviews of the album noted it. Many even lamented that the lyrics were less experimental than the beats.

However, the beats on CLPPNG were, in their own way, quite traditional. For the most part, they represented attempts to adopt regionally and generically specific hip-hop tropes, filtered through the band’s unique lens. The single “Work Work,” which featured a guest verse by Compton rapper Cocc Pistol Cree, was a musique-concrète interpretation of a contemporary west coast beat (think DJ Mustard, League of Starz, HBK Gang) built from the sounds of smashing cinder blocks, crumpling beer cans, rolling ball bearings, and one very musical thermos. “Summertime” (with King T) achieved an old school G-Funk vibe, “Tonight” (with Gangsta Boo) aimed itself at a sweaty Memphis nightclub, and “Inside Out” captured Clipping’s love of 1990s KLC beats for No Limit Records. Even “Get Up,” with its incessant alarm clock drive, was conceived in reference to Trillville’s bedspring-squeaking anthem “Some Cut” and combined with the questionably-motivational message of the Geto Boy’s “First Light of the Day.” CLPPNG’s musical language was one of citation, pastiche, and homage ultimately concluding in an utterly faithful performance of John Cage’s tape composition “Williams Mix.”

The Wriggle EP comprised six tracks that weren’t finished in time to make it onto CLPPNG. For “Shooter,” Clipping recorded themselves firing fifteen different guns, the sounds of which exclusively constituted the beat’s drums, augmented only by a synthesized tone-row. The verses referenced the well-worn technique of “hashtag rap,” but instead of using it to boast about the rapper’s personal wealth and masculine prowess, Clipping generate imagistic narratives of three different violent encounters. True to much of the group’s music, “Shooter” was an attempt to reframe a familiar style and test the limits of its formal capabilities.

“Back Up” featured two of Clipping’s friends and musical associates, the Anticon-signed rapper Antwon and Signor Benedick the Moor, while “Hot Fuck No Love” contained what might be the most explicit verse to date from Clipping’s favorite New Jersey rapper Cakes Da Killa. The EP’s title track, “Wriggle,” was built around a sample of the influential power-electronics song “Wriggle Like a Fucking Eel” by Whitehouse, transforming William Bennett’s torturous imperative in to a instructional dance-floor banger.

Since the release of CLPPNG, many things have changed for the band—William finished his Ph.D. in Theater and Performance Studies with a dissertation on experimental music, Jonathan composed scores for the feature films Starry Eyes, The Nightmare, Excess Flesh, and Contracted: Phase II, and Daveed was in some play.* The variety of their activities outside of Clipping has always influenced their work inside the band, but never has this been more the case than in the creation of Splendor & Misery.

Splendor & Misery is an Afrofuturist, dystopian concept album that follows the sole survivor of a slave uprising on an interstellar cargo ship, and the onboard computer that falls in love with him. Thinking he is alone and lost in space, the character discovers music in the ship’s shuddering hull and chirping instrument panels. William and Jonathan’s tracks draw an imaginary sonic map of the ship’s decks, hallways, and quarters, while Daveed’s lyrics ride the rhythms produced by its engines and machinery. In a reversal of H.P. Lovecraft’s concept of cosmic insignificance, the character finds relief in learning that humanity is of no consequence to the vast, uncaring universe. It turns out, pulling the rug out from under anthropocentrism is only horrifying to those who thought they were the center of everything to begin with. Ultimately, The character decides to pilot his ship into the unknown—and possibly into oblivion—instead of continuing on to worlds whose systems of governance and economy have violently oppressed him.

* Daveed originated the roles of the Marquis de Lafayette and Thomas Jefferson in the acclaimed Broadway musical Hamilton and won the 2016 Tony Award for Best Featured Actor in a Musical.