For their latest album, No One Deserves Happiness, the duo, members Chip King and Lee Buford, decided that their brand of bleak metal should be expanded or altered with unsettling dance rhythms and corrupted electro beats.  The group's latest single, "The Myth Arc," is, in some ways, kind of beautiful.  While a very loud series of echoing blasts of machined static drives the song, not to mention the droning riff that crumbles slowly after every stroke, vocalist Chrissy Wolpert, (Assembly of Light), exudes a calm and delicacy that's at odds with the horror beneath her, so much so that her promise that "I will find you" takes on a haunting level of foreboding.  It is genuinely chilling and not too far removed from the sonic mastery that Scott Walker and SunnO))) exhibited in 2014's Soused.

You can check out the video below.

All video and release information and links were provided by Thrill Jockey. 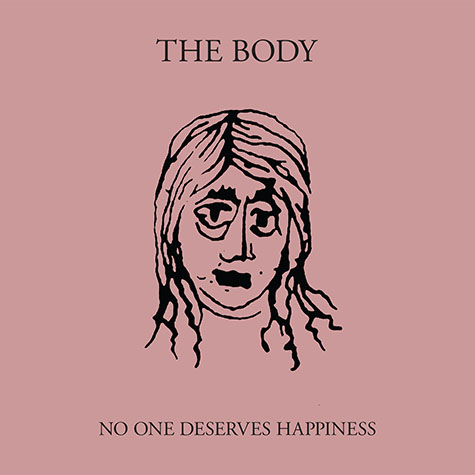 “[They] take doom metal as their core template and shred it to pieces until it's completely unrecognisable." - Pitchfork

"[No One Deserves Happiness] sees the band take a further leap in conception, scope and delivery." - FACT

"This album, like everything the band has done, is designed to break us now only for us to thank them later." - SPIN

"On 'Starving Deserter' they casually unleash the best track The Melvins never recorded." - The Wire

On the cusp of their US collaboration tour with grind band Full of Hell this August & September, The Body have unveiled their eerie and haunting new video for "The Myth Arc," a track taken from the duo's critically acclaimed latest album No One Deserves Happiness.

The video features notable actor Keir Gilchrist (It Follows, It's Kind of a Funny Story, The Good Neighbor), and is directed by Mitch Wells, bassist of sludge metal giants Thou. Gilchrist has been a longtime fan of The Body's and always attends their shows in LA. A truly open-ended video that will linger in the mind after viewing.

On No One Deserves Happiness, The Body’s Chip King and Lee Buford set out to make “the grossest pop album of all time.” The album themes of despair and isolation are delivered by the unlikely pairing of the Body’s signature heaviness and 80s dance tracks. The Body can emote pain like no other band, and their ability to move between the often strict confines of the metal world and the electronic music sphere is on full display throughout No One Deserves Happiness, an album that eludes categorization.

No One Deserves Happiness has received high praise from SPIN, NPR Music, The Quietus, FACT, Noisey, Thump, A.V. Club, and The Wire. They are one of the most in-demand bands around: In the past two years, they have joined forces with metal bands Thou, Sandworm, Full of Hell, and Krieg, recorded with Wrekmeister Harmonies, and collaborated with electronic producer The Haxan Cloak for "I Shall Die Here". They are currently working on a collaboration with renowned UK dubstep pioneer The Bug. This unexpected list of collaborators and unpredictable touring approach further emphasises the demand for the band’s distinctive sound and their open, explorative nature.