- September 19, 2016
Something for us old heads nostalgic for an era when music was still an experience people shared... 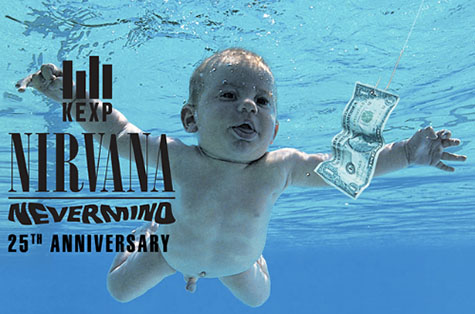 Week of Special Programming Begins Monday, September 19
Seattle – September 19, 2016 In 1988, Kurt Cobain drove to KCMU (now KEXP) to drop off Nirvana’s first single, “Love Buzz”. Anxious to hear it, Kurt tuned in to his car radio all day, finally pulling off to a pay phone to request it himself. He then listened as Nirvana was played on air for the first time. Less than a year later 90.3 was also the first station to play Nirvana’s debut album, Bleach. Three years later, Kurt and Nirvana returned to the station in person to premier the band’s second album, Nevermind. As this classic observes its silver anniversary this month, KEXP celebrates with a week of special programming—and we invite everyone to participate.

"Kurt Cobain was the last rock star… That stardust you only see a few times in rock history. You can’t manufacture it,” said Charles R. Cross in his exclusive interview with KEXP.

Nirvana fans are encouraged to share their personal Nirvana stories by leaving a message at (412) 4-GRUNGE (412-447-8643). KEXP will edit the best listener memories into short segments that will air during daytime programming the week of Monday, September 19.

On Friday, September 23, KEXP kicks off its Fall Fundraising Drive with twelve hours of music from 1991, including classics by My Bloody Valentine, R.E.M., Massive Attack, A Tribe Called Quest, and Primal Scream. The week culminates on Saturday, September 24, at 6:00 p.m. with a special edition of Audioasis dedicated to the legacy of Nevermind.

KEXP’s ties to Nirvana pre-date Nevermind. Sub Pop co-founder, Jonathan Poneman, was a KCMU DJ and the original host of Audioasis. In fall 1991, he convinced afternoon DJ Riz Rollins to debut Nevermind and discuss it on-air with the band members. Later, Rollins was the DJ at the notorious Seattle album release party that ended in a food fight and Nirvana being kicked out of the venue.

“We are proud of our role championing emerging bands. This station was the first to take a chance on Nirvana when we played “Love Buzz,” the first song by Nirvana heard on the radio,” said KEXP Morning Show host John Richards. “We then had the band up and were the first to play what would become one of the most important albums ever made, Nevermind.”

ABOUT KEXP KEXP is one of the most influential listener-supported music radio stations in the country. More than 200,000 listeners from around the world tune in to the station each week over the air and online. On KEXP's YouTube channel, videos of exclusive in-studio performances garner more than 1.7 million views per week. KEXP produces over 500 live performances each year. For more information, please visit www.kexp.org.