How the Promotion of a Niche Format Makes for a Good Excuse to Shop In Comfort (or, Cassette Store Day, 2016) 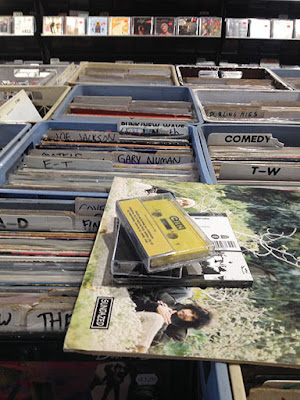 Cassette Store Day is probably unnecessary.  I won't pretend there's any real need to promote cassettes in the download era, even if the format's cool factor has heightened over the last five or more years.  I'm one who still enjoys listening to certain albums via tape deck, aware that, for indie circles, (and not "indie" as genre, but indie as independent), cassettes provide artists and labels the means to retain the purity of the physical format cheaply.  Plus, there's always the potential to create something that looks cool.

I met up with my friend, Chris, Saturday morning outside of Repo Records, a rather dreary day on still-sleepy South Street.  Repo was the only spot in Philadelphia, (or Pennsylvania for that matter), participating in the aforementioned Cassette Store Day, which is another event prompting labels to kick out special releases and encouraging stores to stock them for the sake of increased foot traffic and earnings potential.

The store opened at 11:00 AM and the two of us walked in, no lines to wait in or crowd to wade through.  A modest selection of cassettes was on display by the front register, a small card with "Happy Cassette Store Day" written on it.  It didn't really take long to peruse the selection.

This year's list of CSD releases had been posted on the event's website, so there were a few things I was looking for, namely the J Dilla Welcome 2 Detroit / The Shining and DJ Shadow's new album, The Mountain Will Fall.  Northern Spy Records put out some releases I was interested in checking out and I would've liked to have been able to pick up any of the block of Seasons Of Mist releases from Christian Death, Gorguts, and Dillinger Escape Plan, (metal on cassette is basically how I enjoyed the genre till I decided to go digital).

What we did find were 80s film soundtracks, (Rad and Ferris Bueller's Day Off), Prince reissues, and some live recordings.  There was also a cassette reissue of the Ramones' first album and the Amerigo Gazaway Fela Kuti/De La Soul mashup, Fela Soul, which, now that I think about, probably should've been on my list.  Sunny Day Real Estate's Diary was also available, but I still have my Sub Pop-issued cassette of that album from 1994.

I wound up grabbing a live concert cassette from Can, Live at the Koln Sporthalle, 3 February 1972.  I also grabbed Organix, the first album by The Roots.

Ultimately, Cassette Store Day provided an excuse to head out and hit a record store.  As the event hasn't yet been co-opted by the industry majors, (not that this event will ever breed the unfortunate level of opportunism that Record Store Day has), it made for a comfortable day of casual crate digging. 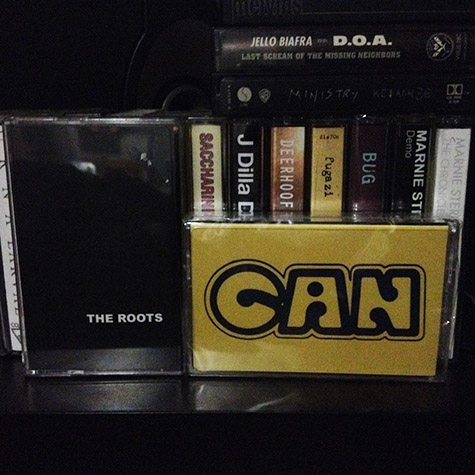