Run The Jewels: "Legend Has It"

For our Jewel Runners,

Holy Shit. We can't believe we get to finally write this to you...RTJ3 IS READY!!!! After a straight year of work the next chapter in this madness is done. We'll spare you too much talk but we will say this: thank you so much for making RUN THE JEWELS the most amazing experience either of us have had in our careers. We hope you feel the love and time we put in to this record and can't wait to share it with you and see you out on the road. Whether you buy it, download it for free, steal it from your annoying cousin or hear it at a show, just know that we are eternally grateful for the love you've shown us. Thank you thank you thank you thank you. 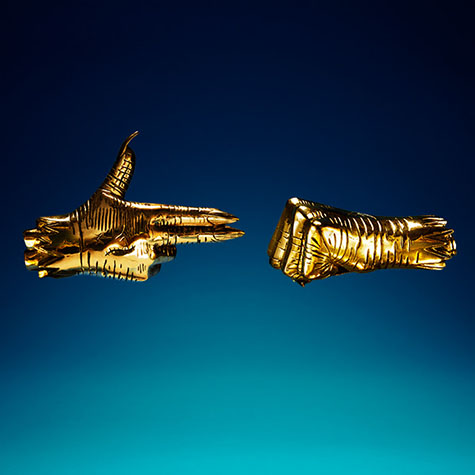 A note about our new album cover:

On their 3rd offering, Run The Jewels have turned their iconic “pistol & fist” imagery (conceived by El-P & drawn by Nick Gazin) 3D, rendering the original album cover concept as sculptures of the hands cast in metal, chromed and gold-plated. The resulting statues were beautifully photographed & brought to life by frequent collaborator Tim Saccenti, and grace the new album cover. RTJ has this to say about the artwork:

"For us, the RTJ1 hands were about ‘taking what’s yours’ - your world, your life, your attitude. The RTJ2 hands were wrapped in bandages, signifying injury and healing, which for us represented the growth in ideas and tone of that album. For RTJ3 the bandages are off, the chain is gone and the hands have been transformed into gold. For us this represents the idea that there is nothing to take that exists outside of yourself. You are the jewel.”

14. Report to the Shareholders/Kill Your Masters