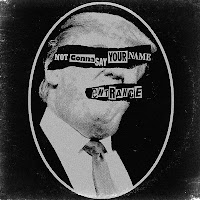 Guy Blakeslee of Entrance has released a new protest track called, "Not Gonna Say Your Name," a folk-blues penned as indictment of our President-elect, Donald Trump.

Blakeslee is offering the track for $1 with all proceeds being funneled directly to Planned Parenthood, an organization currently under threat of having its funding cut by the incoming administration.  You can check out the track here:

With the Presidential inauguration almost upon us, ENTRANCE releases brand new protest song 'Not Gonna Say Your Name'

All proceeds donated to Planned Parenthood
Buy it here now

Today Los Angeles based musician Guy Blakeslee (aka ENTRANCE), releases a new track, 'Not Gonna Say Your Name,' in advance of the President-elect’s impending inauguration.

Blakeslee says of the song, “I really wanted to write a song expressing my own feelings about the election and the state of things in our country – like many I was in a state of mourning. I wondered, how can I sing about this without saying his name?”

'Not Gonna Say Your Name' is now available via Thrill Jockey on participating DSPs, with all proceeds from song purchases and streams going directly to Planned Parenthood, an organization that Blakeslee holds near and dear to his heart. “I decided to use the song to benefit PP because one of the things that is so shocking about the election result is that it sends such a negative message to women and girls,” he says. “It's the least I could do - for all of the women in the world, in my life, and especially for my mother - to fight back and make a clear statement that we will not accept this backwards agenda.”

ENTRANCE will also be performing at a Planned Parenthood Benefit taking place in Los Angeles at the Teragram Ballroom this Valentine’s Day, alongside artists including Ty Segall, Kevin Morby, and King Tuff.

'Not Gonna Say Your Name' is now available to stream and purchase via Thrill Jockey, Bandcamp, Spotify and iTunes, with all proceeds being donated to Planned Parenthood.

ENTRANCE will also be releasing Book of Changes - his first full-length album for Thrill Jockey - on February 24th.