Marriage + Cancer: "Honour, On Our Knees"

- February 08, 2018
Along with METZ, Pissed Jeans, and KEN mode, I recommend Marriage + Cancer for your Subterranean/Reptile/Dischord/Touch & Homestead rock needs.

"Honour, On Our Knees," a new single from the band's upcoming self-titled LP, is certainly evocative of an era.  For those of us who enjoyed our adolescence glued to a Walkman, the volume too high as the spool wound through a primal, undulating mire composed of guitar-aggravated stress and angst, Marriage + Cancer will revisit and tug relentlessly at those sensibilities.  And, you'll like it, goddammit.  Guitarist Robert Comitz apparently has some legacy with K Records as a member of the band Nucular Aminals. 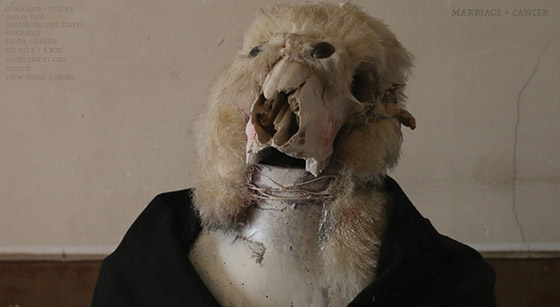 This track premiered at New Noise.  Marriage + Cancer will be out February 9th via Self Sabotage Records.  All info was delivered courtesy of the excellent people at Us/Them Group.

"A perfect example of the Portland, OR quartet's compelling merging of In Utero-era Nirvana's raw emotional intensity with Drive Like Jehu and Jesus Lizard's musical prowess and melodic contortions." -- New Noise Magazine

Marriage + Cancer are a quickly rising noisy melodic band from Portland, OR. Their heavy, driving, chaotic sound has captivated audiences in the Pacific Northwest, grabbing the attention of Austin label Self Sabotage, who jumped to release the band's full length debut. The album was recorded LIVE at vocalist/guitarist Robert Comitz's Stop/Start Studio, engineered by Billy Anderson (Sleep, Melvins, Neurosis) and mixed by Brent Asbury (Pinback).

Marriage + Cancer sounds off from the jagged recesses of domestic landscape, their self-titled debut letting out a bellicose & harrowing howl into today's political & social voids. Rising from the ashes of K Records band Nucular Aminals, vocalist/guitarist Robert Comitz reformed the band under its new moniker, shedding the former's organ grinding & jaunty goth riffs for a heavier approach ranging from the thumping bass of album opener "Command + Comply" to the early-Sonic Youth-esque riffing of "Gound" to the rhythmic expanse of "View From A Cross."

Marriage + Cancer will be available on LP and download on February 9th, 2018 via Self Sabotage Records, a division of Super Secret Records. Pre-orders are available HERE.