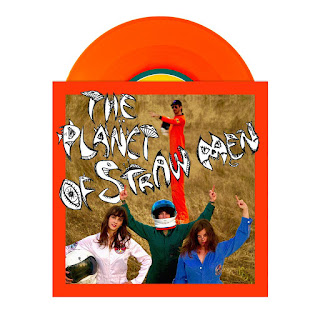 "All paths lead to nowhere; and it all adds up nothing..."

Yes, there's a new Tropical Fuck Storm single out. And, yes, you should listen to it.

The splintery observation punk of Gareth Liddiard, Fiona Kitschin, Lauren Hammel, and Erica Dunn has produced a new single called "The Planet of Straw Men." Joyful Noise is releasing the single on May 3rd as a limited-edition neon orange variant and black vinyl. A Tropical Fuck Storm interpretation of Missy Elliott's "Can't Stop" will grace the b-side.

The single is currently available for pre-order via Joyful Noise.

Tropical Fuck Storm's excellent 2018 release Laughing Death in Meatspace was reviewed for No Ripcord. If "The Planet of Straw Men" does anything for you, the band's debut LP should be an immediate acquisition. You can find that here.

All info has been provided by Speakeasy PR.

March 5, 2019, Melbourne, Australia – In advance of Tropical Fuck Storm's European tour, the band has shared a new song (and accompanying video): "The Planet of Straw Men." The song, which is an early preview of a planned late 2019 full-length album, is available as a limited edition 7-inch via Joyful Noise (b-side features a cover of Missy Elliott's "Can't Stop"): joyfulnoi.se/TPOSM.

"In a world where dissident writers are drawn and quartered, communists wear Rolexes, and Trump drives around with a fridge-full of blood; our new single is testament to the jester's duty," offered the band.

Tropical Fuck Storm features ex-The Drones’ Gareth Liddiard and Fiona Kitschin with Lauren Hammel (High Tension) and Erica Dunn (Harmony/Mod Con). The band released A Laughing Death in Meatspace (https://spoti.fi/2Tw6Ocw) in October. The band celebrated the North American release of the album with a coast-to-coast tour, supporting Modest Mouse, as well as a stop Paste’s New York studio for an acoustic session, including a pared down version of “You Let My Tyres Down” (https://youtu.be/jwXFWtUMImw).