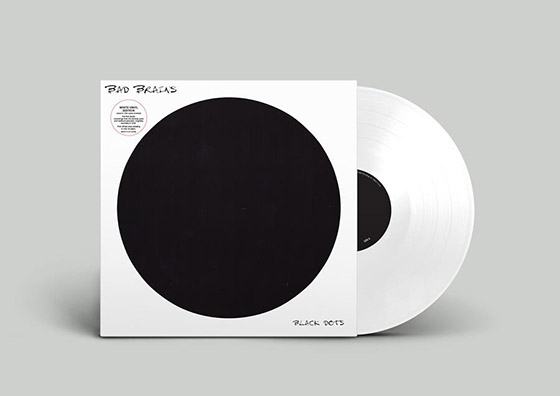 When Black Dots was issued by Caroline Records in 1996, my then 19-going-on-20 year-old self happened up a copy at THE WALL over at Montgomery Mall. I didn't really know what this CD was at the time, (the very young band members featured on the back cover confirmed that this wasn't new music), but the Bad Brains' name was attached to it so I happily nabbed an overpriced copy, took it home, and threw it on and proceeded to hit "REPEAT" for a few weeks.

With that said, even at their earliest stages Bad Brains exudes force and precision, their progressive chops applied to annihilative sonic extremes all the while positioning themselves as harbingers of "PMA." Black Dots captures the band as a live onslaught and it's being reissued by Wax Audio Group, a limited 1500 white vinyl pressing to be followed by the black vinyl pressing. I hope ROIR Sessions follows.

Info and pre-order links provided by the excellent people at Force Field PR.

Bad Brains' first recordings from 1979, Black Dots to be reissued on vinyl for the first time in over 20 years

Black Dots is the first official studio recording for the seminal punk rock artists known as the Bad Brains. It was recorded in 1979 at Inner Ear Studios.

This is the first official vinyl pressing in over 20 years, presented by Wax Audio Group and Think Indie via Universal Music Group Special Markets. Cut for vinyl by Kevin Gray at Cohearent Mastering, Print and Packaging from Pirates Press. Pressed at RTI. One time pressing of 1500 units on WHITE VINYL available on or about March 29th 2019. A black vinyl pressing will follow in April 2019.

Guarantee your copy by pre-ordering here

"Surfacing out of nowhere in 1996, Black Dots turned out to be an archival release of the best kind, something truly rare and unheard that also captured a band at its best. The liner notes explain the origins of the release: In 1979, fellow DC locals the Slickee Boys heard an even earlier rehearsal tape from the Brains and suggested hooking up with now-legendary DC producer Don Zientara, who had recently opened his Inner Ear Studios in his house. The group duly booked time, set up in the fledging venue and put on a commanding performance. Nearly all the legendary early hits are here, including 'Pay to Cum,' 'Don't Need It,' 'Regulator,' 'Banned in D.C.,' 'How Low Can a Punk Get?' and 'Attitude,' while a number of otherwise unheard or never-recorded elsewhere numbers make Black Dots easily the equal of the ROIR cassette. Some of the changes and quirks are really fun -- H.R.'s mock-cockney sneer throughout a number of songs is one of the last things probably anybody expected to hear. Aside from "new" oldie "The Man Won't Annoy Ya," the reggae side of the band went largely by the boards this time around, aside from the reedy inflections HR throws in from time to time. Instead it's all monster-rock power -- Dr. Know plays like a man possessed, Darryl Aaron Jenifer does it low and loud, while Earl Hudson overcomes for the slightly hollow drum sound with sheer manic smashes and just enough control. Absolutely necessary for Brains fans or anyone who appreciates the power of live, loud electric music." -Allmusic