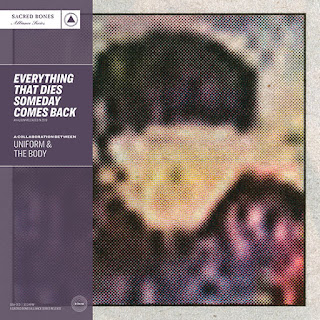 I stress that The Body remains a consistently fascinating entity whose work I either champion or dismiss, the creative push-n-pull a la Chip King and Lee Buford qualifying as anything from merely pushing decibels to forward thinking and genre-hybridizing to unlistenable grating shit-spew. With that said, The Body partners well. Those excellent recordings they released with Thou, Released From Love and You, Whom I Have Always Hated, remain some of the most ear rupturing sounds I've heard on a physical album. So, being a Uniform fan, I have high hopes for Everything That Dies Someday Comes Back, The Body's second collaborative noise venture with the group, which is due to release 8/16 via Sacred Bones.

Uniform, another duo with a penchant for amplified gloom and tolerance-pushing vocals, has a machined edge that suits The Body's amp'd up misery. "Not Good Enough" is like a ten-megaton Suicide, every driving pulse set to trudge as if dragging the track's remaining elements behind it. The quartet heads well into the red, most of its make-up built from hollow-out drum fills and its aforementioned stomp, though radiating drone and glacial stabs of synth tone eventually inform its latter half enough that it doesn't become monotonous.

Of the singles I've heard from this release so far, "Not Good Enough" is the stand out.

All links, information, and tour dates were provided by Rarely Unable.

Uniform & The Body share the new single "Not Good Enough" from their second monolithic collaboration, Everything That Dies Someday Comes Back, out August 16 via Sacred Bones.

Of the track, Uniform's Michael Berdan explains, "There is no deeper meaning to Not Good Enough outside of what the title spells out. It is a song about my relationship with my worst enemy: myself. So much of who we become is shaped in our early childhood. For me, my identity was that of a heavy set kid with a learning disability from a broken home in a rougher neighborhood. I may have grown up. My physical body may have changed. I may have made peace with my family. I may have escaped my hometown. I may have developed techniques to function as an adult. In the end, in my mind, it means little to nothing. I am still the hyperactive fat kid who can't stay still and gets beat up in the nearby park. Self knowledge avails me little. True or not, I will never be complete. I will always be defective. I will never be good enough. All of the love and success and acceptance in the world will never heal the scared little kid in my head."

LISTEN TO THE NEW SINGLE "NOT GOOD ENOUGH"

Comprised of an amalgam of abrasive influence that spans Swans-y dirge and purge, Whitehouse's clenched-jaw noise, middle-period Ministry's penchant for metallic post-industrial everything, New Order's nose for melodic emotionality, and Juicy J-inspired beats, Uniform and The Body's approach delves deeper down the rabbit hole than before, igniting a sonic world of terror and bliss poised to grip the throats of fans yet again.

Much like the collective's bombastic debut, Everything was built over a series of collaborative sessions with Seth Manchester at Machines with Magnets in Rhode Island, mixing industrial-influenced synths, squalls of harsh noise, manipulated guitar, oodles of samples along with hard rock-inspired riffs, saccharine pop, and the alternately antagonistic and harrowing vocals of Michael Berdan and Chip King. The result is nine tracks of ear-bleeding and confrontational fury with defined moments of beauty that bring to mind equal parts No Trend, Merzbow, and Information Society while forging a path that is distinctly their own.

Everything That Dies Someday Comes Back is specifically culled from the immortal Bruce Springsteen effort Nebraska, joining a long line of literary and cinematic references that pepper the album. And while the title is specific to that lyric, the sentiment also ties into author James Elroy and his notion that closure is an illusion, a conclusion found in his 1996 effort 'My Dark Places'. Dealing with tragic loss is never a closed book, and the details, circumstances, and inherent emotions that surround coping never end, they just morph into something else, only to rear their ugly head again later in life.

The collaboration between the two bands was built upon mutual admiration for each other's work, which led to bonds of friendship. After the release of the debut collaborative effort, Uniform released the critically praised The Long Walk and embarked on a smash tour with Deafheaven and Drab Majesty, while The Body released the widely acclaimed I Have Fought Against It, But I Can't Any Longer and took to the road for their own successful and extensive North American tour. The demand for the collaboration eventually necessitated a U.S. jaunt, pairing the collective for rare dates with Author & Punisher and Street Sects on both coasts. It was on those dates that the bands started to plant the seeds for what would become Everything That Dies Someday Comes Back.

Everything That Dies Someday Comes Back will be released August 16 as part of Sacred Bones' Alliance Series. A new CD edition, also out August 16, will include both Uniform & The Body collaborative albums - Mental Wounds Not Healing and Everything That Dies in their entirety - for more info and to pre-order go here.