For Fans of the Box — Engine Kid & Faust

To whom it may interest,
A few announcements for fans of the box:
Engine Kid
Everything Left Inside
Southern Lord
Released: 6.12.21 (RSD 2021-Drop 1 — Yes, this is late) 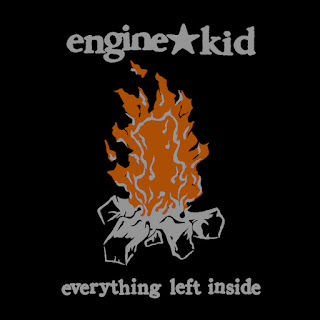 Appreciators of sunn O))) and Goatsnake know Greg Anderson. Prior to the release of their new 6-LP box set, Everything Left Inside, I'm embarrassed to admit that I had no idea about Engine Kid, a Seattle-based post-hardcore trio whose initial make-up had been composed of Anderson (vocals/guitar), Chris Vandebrooke (drummer) and Art Behrman (bassist). From the promo selections that I've been able to listen through, Engine Kid's Everything Left Inside fits nicely alongside the audibly distraught and naturally abrasive sounds of Unwound, and would've been an obsession of mine during their days of activity had I been aware of them.
Treated for now as a Record Store Day release, which occurred 6/12, a later version of the box set meant for international distribution will be issued at a later date.
In the meantime, you can sample "Angel Dust" via the Bandcamp link below.
Bandcamp — https://enginekidsl.bandcamp.com

Almost 30 years since the inception of Engine Kid, and the trio find themselves comprehending the enormity of their creation, honouring and celebrating the mountains they formed and the canyons they created.

Engine Kid was born in Seattle, WA 1991. The band's original lineup consisted of guitarist/vocalist Greg Anderson (Southern Lord, Sunn O))), Thorr's Hammer, Goatsnake), drummer Chris Vandebrooke & bassist Art Behrman. The three had all been in hardcore/punk bands around town and all had a burning desire to create a sound that was unlike anything they had done in the past. After just a few months of existence they quickly recorded and self-released the Novocaine 7”. Circa 92’ a close friend and bassist Brian Kraft (Krafty) replaced Behrman, and at that moment the entire aesthetic and execution of sound became heavier, darker and extremely dynamic. The power trio was picked up by local label C/Z records and set out upon recording the new music they were quickly creating. In 1993 the band had two releases on C/Z. Their first offering was the Astronaut five song EP recorded by John Goodmanson. The songs were primitive and exemplified the bands worship of Slint and their loud/quiet song dynamic In the summer of 93’ the band drove all the way to Chicago to record with their hero Steve Albini in the basement of his house. They emerged with the eight song album they called: Bear Catching Fish. Albini intuitively captured the band exactly as they were at that moment: RAW, VULNERABLE, & MAMMOTH.

Shortly after the albums’ release Jade Devitt replaced Vandebrooke on drums. This transition was extremely crucial in the “second phase” of the group. Devitt was an absolute beast and his power helped launch the band miles beyond where they had ever been before. The sound of “The Kid” started to transform into a sound much more of their own. The three dudes were hellbent on pushing the bounds of sonic exploration to its absolute fullest. Suddenly there was an abundance of depth within the sounds they were creating. Eclectic influences of punk/hardcore (Black Flag, Die Kreuzen), Metal (Entombed, Carcass) and even jazz (Mahavishnu Orchestra, Miles Davis electric era) were in a full collision course with the already dynamically heavy foundation of the band. The levee had broken and the resulting flood of sound completely saturated everything in its path.

Engine Kid toured relentlessly. They were constantly on the road playing every nook and cranny they possibly could. Any moment not spent on the road was instead spent focused on making their new material as potent as possible. Early in 94' the band decided to pay homage to their mutual love of jazz/fusion and recorded three instrumental pieces that would become a split album with like minded powerhouse Iceburn. The EngineKid/Iceburn album showcased each group's love of jazz loosely framed by the intense enthusiasm of underground music. The album was released by Revelation records in 1994.

During the summer of 94’ the band reconvened with producer John Goodmanson at Bad Animals & AVAST! studios to record the new material that was literally bleeding out of the reinvigorated trio. These recorded songs were much more progressive, heavier, harder and more focused than past works. They even tackled John Coltrane's “OLE” adding saxophone and trumpet from their brothers in Silkworm. In March of 1995 Revelation records released these recordings as the Angel Wings album. Unfortunately "the Kid" flew too close to the sun and broke up very shortly after the album's release. 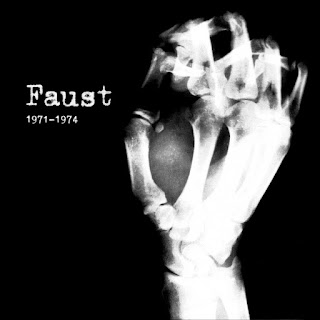 As Bureau B had done with Cluster a few years back, the label is releasing a collection of works by the seminal Kosmische Musik ensemble Faust. Faust is a creative force that I've been slowly delving into, owning only the Superior Viaduct reissue of The Faust Tapes on LP, whose track listing interestingly differs from the version Bureau B is releasing. A fascinating soundscape of folk-flavored psychedelia and crudely cut sonic collisions, The Faust Tapes is a curiosity that I often return to, pondering its existence within the rock-concerned musical climate of the 1970s.
From my perspective, as Faust relates to other KM groups of their ilk, namely the aforementioned Cluster, Can, Kraftwerk, and Amon Düül II, the group's carnival-level chaos, disjointed percussive excursions, and fuzz-tone psych jams tap into a consciousness that deemed what was then the current diet of guitar-laden, arena-ready rock fodder which had already grown bored and cynical by the early 70s, (some notable exceptions including Black Sabbath, The Stooges, The Monks and other budding proto-metal/punk bands/acts also disillusioned with the musical climate), as running on fumes. For context, Brian Eno and David Bowie went all in on Kosmische Musik, already decidedly "over" the self-aggrandizement of the Woodstock generation and entranced by this wellspring of creativity that was localized within Germany.
Bureau B's Bandcamp: https://bureaub.bandcamp.com
Pre-order link: BUY
All info comes courtesy of Mutante-Inc.
A band’s fame can be measured in the sum of myths, legends and stories which are conjured up in their wake. In which case, Faust have been playing in the Champions League for quite some time. Few bands have been as innovative, influential or as irrepressible as FAUST – the way they revolutionized the history of music in the space of just four years puts them right up there with The Velvet Underground. What began in a Hamburg (Sternschanze) bunker in 1970 would send shockwaves around the world. Here’s how Stephen Morris (Joy Division/New Order) remembers it:
“The first Krautrock record which made a lasting impression on me was the debut album by Faust. The transparent disc looked spectacular and the music was mindblowing, not songs as such, it was something absolutely unique, the polar opposite of everything the Rolling Stones, Beatles and the like were doing. It was right up my street.” (quoted in: Dallach/Future Sounds, p. 485 ff.)

This box is the first virtually complete collection of FAUST works from the years 1971-1974. In addition to the debut album referenced by Morris, it includes the 1972 album So Far, the legendary 1973 Virgin UK release The Faust Tapes (“Some chose to play frisbee with the LP, others said it changed their lives” as Jean-Hervé Peron noted), Faust IV and, for the first time ever, the mythical, so-called “Munich album” Punkt, which Faust recorded at Giorgio Moroder’s Musicland Studios in 1974. For one reason or another, this last album never saw the light of day - until now. The bonus albums Momentaufnahme I and Momentaufnahme II also feature unreleased material, simultaneously affording us a fascinating glimpse of Faust’s creativity in their Wümme studio phase.

Two 7-inch singles round off the Faust 1971-1974 compendium: Lieber Herr Deutschland is the demo recording they sent to Polydor in 1971, remarkably triggering a contract offer from the label who had something of a conservative reputation at the time. The track later resurfaced as the B-side to their single Baby, a song which had been rejected by the aforementioned label. The second 7-inch single in the box is a rerelease of So Far, the first FAUST single on Polydor, originally issued in 1972.

It is by no means overstating the case to assert that FAUST created and christened a genre (the name would prove emotive) in one fell swoop (track 1 on Faust IV).

This box is no more and no less than the holy grail of Krautrock. Even 50 years (or perhaps all the more so) after they took their first musical steps in a bunker near Hamburg’s Sternschanze station, Faust still sound revolutionary, timeless, irrepressible and, above all, unique.

LP3 The Faust Tapes A1) Several Hands On Our Piano A2) Don’t! A3) Flashback Caruso A4) Voices And Trumpet And All A5) J’ai Mal Aux Dents A6)Beim nächsten Ton ist es… A7) Two Drums, Bass, Organ A8) Dr. Schwitters Intro A9) Several Hands On Our Piano (Continued) A10) Beam Me Up, Scotty A11) Elerimomuvid A12) Dr. Schwitters (Continued) A13) Have A Good Time, Everybody A14) Above And Under Our Piano B1) Hermanns Lament B2) Donnerwetter B3) Was ist hier los? B4) Rudolf der Pianist B5) Ricochets B6) I’ve Heard That One Before B7) Watch Your Step B8) Under Our Piano Again B9) Fluid Chorus B10) Stretch Out TimeB B11) Der Baum B12) Chère Chambre
LP4 Faust IV A1) Krautrock A2) The Sad Skinhead A3) Jennifer B1) Just A Second / Picnic On A Frozen River, Deuxième Tableau B2) Giggy Smile B3) Läuft… Heisst das, es läuft oder es kommt bald?… Läuft! B4) It's A Bit Of A Pain

LP5 Punkt A1) Morning Land A2) Crapolino A3) Knochentanz B1) Fernlicht B2) Juggernaut B3) Schön Rund B4) Prends Ton Temps LP6 Momentaufnahme I
A1) Naja A2) Flaflas A3) Es Ist Wieder Da A4) Mechanika A5) Weird Sounds Sound Bizarre A6) Karotten A7) RéMaj7 A8) Fin De Face B1) Vorsatz B2) Acouphènes B3) Interlude 18. Juni B4) Dadalibal B5) Bonne Soupe Au Fromage B6) Rückwärts durch die Drehtür

LP7 Momentaufnahme II
A1) Danach A2) Gegensprechanlage A3) Lampe an, Tür zu, Leute rein! A4) Purzelbaum mit Anschubsen A5) Tête-à-Tête im Schredder A6) Dampf A7) Testbildhauer A8) I am... an Artist B1) Wir wollen mehr Volumen kriegen B2) Arrampicarsi Sul Vesuvio B3) …und alles durcheinander B4) The Fear Of Missing Out B5) Ma Trompette B6) As-tu Vu Mon Ombre?

Single 2
A1) So Far (Single Version)
B1) It's A Bit Of A Pain
Sincerely,
Letters From A Tapehead
Labels: art punk box set bureau b for fans of the box kosmische musik krautrock post-hardcore southern lord