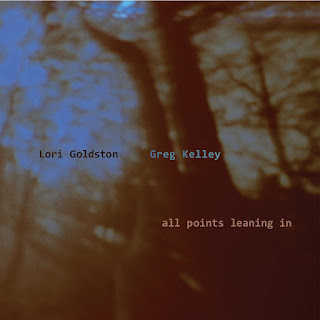 Lori Goldston & Greg Kelley
All Points Leaning In
Broken Clover Records
Released: 1/19/23
On November 18th, 1993, cellist Lori Goldston performed with Nirvana for MTV's Unplugged.
When I found out about All Points Leaning In, which is Goldston's new album with trumpet player Greg Kelley, a "6 Degrees of Kevin Bacon" level of familiarity hit me as I thought to myself, "Where have I seen that name before?"
Oh, I know that name from when I was 17 years old and listening intently to Unplugged In New York on CD, scanning the liner notes and song credits while Kurt Cobain strummed a live rendition of "Something In The Way", Goldston's beautiful bowed embellishments stretching beneath the acoustic melancholia. That's why I know that name.
A lot of you may remember Goldston the same way. However, for All Points Leaning In, consider this album the aural purge you were looking for, a cathartic noise project rife with deep, droning, textural sirens conjured from the stroke of Goldston's wrist and the breath from Kelley's lungs. This partnership had apparently taken shape as the pair worked together on various projects, them largely abandoning rhythm and melody as they luxuriate in the harsh and dense array of sounds they create. Produced by Steve Fisk (Pell Mell), All Points Leaning In was apparently recorded live. No overdubs.
Not too far removed from Body/Head, the Bill Nace/Kim Gordon effort, the overall presentation here is (again) dense. It's dense enough in fact that many of the nuances within these improv'd environs aren't easy to distill from a single listen. At about its latter half, for "Toward Clarity", the album's opener, Kelley manages to push discernible, requiem'esque melodic tones through his trumpet, Goldston's scrubbing of her bow against the cello's strings airy enough to grant Kelley passage beyond the mire. The title track follows and does keep to the same plot, medley-like as a quivering buzz caps the sounds beneath like a ceiling. This gradually fades as Goldston slows down, Kelley's dramatic tone carrying the track to its conclusion. "You're In Good Company" is the shortest piece, blankets of reverb overtop that sound akin to a guitar feeding back. "Seeing Stars" is the closer, a lengthy 14 minutes of thickly built rubs and scratches from Goldston's cello while Kelley ably replicates throat singing with his trumpet, his sounds almost shapeshifting. There are also points when fields of distortion are left to undulate in the distance, cutting in and out. Parts of this track remind me of Sunn O))), some of the drones handled with a similar level of doom-laden or sinister intent.
With 33 minutes of runtime and four full tracks, All Points Leaning In is not the most varied release, nor is it for everyone or for all occasions. But, as an immersive work I was engaged and impressed with the sonic immensity attained.
Bandcamp: https://lorigoldston.bandcamp.com/album/all-points-leaning-in
Broken Clover Records: https://brokencloverrecords.bandcamp.com/
Sincerely,
Letters From A Tapehead
collaborations experimental noise